Before leaving to Spain for two weeks of international basketball, Coach Larranaga and his players had one last practice at the BUC.

Larranaga spoke to the media before readying his players. Here are some of the more memorable quotes from his presser.

Q: Speed in practice has picked up significantly since last year, explain

"One, there's a 24-second clock in Europe. Two, we'd like to think that we're better for an up tempo this year. Three, it's the best way to get in great shape."

"They are entirely different. Shane was a very quiet leader, he was more someone who could talk to you individually, whereas Angel, sometimes you can't get him to be quiet."

Q: How's the chemistry of the team?

I played a game where I gave them a map of the world so they could find where players on the team were from, I asked Manu (Lecomte) where he was from. He said 'I'm from belgium...(continuation below)"

Before practice, I had a 1-on-1 conversation with Deandre Burnett, who sat out last season with a wrist injury. He talked about his return to play, the funniest and toughest guys on the team and what he listens to before games. Here's the full transcript. 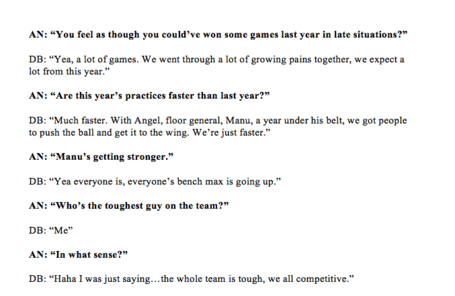 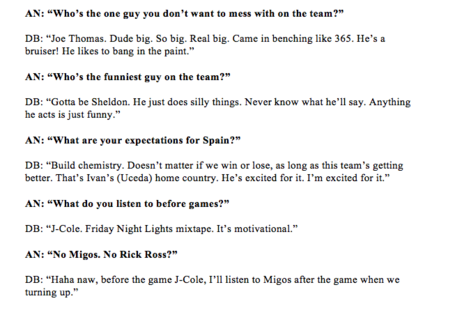 Players took the courts for practice, but someone was missing...Angel Rodriguez. Rodriguez came in late with casual clothes, a Mcdonalds and a knee brace. UM has yet to reveal an official report on the injury, which was sustained yesterday. Rodriguez will most likely not play in Spain. 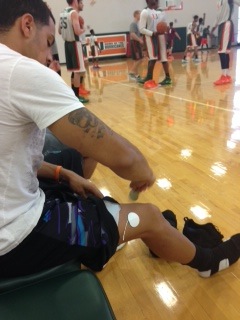 Before practice began, Coach L lined up his players and went through a set of "10 Commitments" about being a Miami Hurricanes basketball player.

Larranaga seems to want to build a special bond within this team. He's preaching fundamental basketball. Larranaga even showed his team tape of the San Antonio Spurs ball movement, because he wants to mimic them.

At times, Coach L would be pleased with the ball movement.

Other times, Larranaga would stop practice, and speak to his players.

And with that, the Canes are off to Spain.