A Special Trip to Lincoln, Nebraska

A story about family, tradition, and learning life lessons through college football. The upcoming Miami Nebraska game means everything to me.

Share All sharing options for: A Special Trip to Lincoln, Nebraska

On September 19th, my brother and I will start our journey to Lincoln, Nebraska that has been six years in the making. Regardless of the game’s outcome, it will be a special trip.

In 2008, Miami agreed to a home-and-home football series with the Cornhuskers. My family couldn’t have been more excited about the announcement. Memorial Stadium in Lincoln was a place we’d always wanted to see in person, especially my Dad who viewed the matchup as the renewal of a great rivalry.

For more than a decade, my Dad, my brother, and I had followed the Canes on the road at least once a year. We took pride in seeing the country by visiting college football towns and stadiums. Win or lose, we always had a great time experiencing what makes the sport so great. We’d been to nearly every ACC stadium, and visited places like State College, PA, College Station, TX and Norman, OK. In the months and years following the announcement of the Nebraska series, the three of us would constantly remind each other about the trip we had mentally planned. Every time the Cornhuskers played a home game, texts would go back and forth that said "See you in Lincoln – 2014."

In September 2012, we traveled together to the Little Apple. Although we were extremely disappointed with Miami being blown out by Kansas State, the trip was a fun adventure through the Midwest. I wasn’t prepared for it to be one of our last road games together.

A few months after the loss, my Dad was diagnosed with leukemia. He began his treatment at the University of Miami Hospital and felt at home when he saw staff members wearing outfits with the "U" on them. While he was in the hospital, we put up signs with things to look forward to in the future, trying to stay positive. One of those was "Go to Lincoln in 2014 for the Miami game." After a seven-month battle with the disease, my Dad passed away at the age of 56.

My Dad grew up in Miami and always supported the Hurricanes. He attended UM in the mid to late 1970’s. He sat in the stands through years of football disappointment, but always believed a better time would come. The 1980’s were an amazing time in his life, as he got married, had two kids, and enjoyed three UM national championships. He spent Saturdays at the Orange Bowl, watching a true dynasty in college football.

His passion for the Hurricanes must have been hereditary. I was a diehard Miami fan from the moment I was born. Same for my brother who knew of Vinny Testaverde before he knew most of his relatives. Our early childhood was filled with stories about Melvin Bratton, Michael Irvin, Bernie Kosar, and Jerome Brown.

As we got a bit older, we would ask my Dad what his favorite all-time game was. He would always respond quickly with the same answer. "The 1984 Orange Bowl, the game that changed everything."

Nebraska was undefeated and a heavy favorite against Miami, even though the game was being played in the Hurricanes’ home stadium. The Canes stopped Nebraska’s two-point conversion attempt in the final minute, to win a thrilling game 31-30. The win earned Miami its first national title.

My Dad framed the newspaper clippings from the following morning that celebrated the win, and kept it prominently placed in his home for the rest of his life. The collage is now proudly hung up in my house. It became a family tradition that whenever my brother or I stayed home sick from school, we watched the tape of the 1984 Orange Bowl. Don Criqui and John Brodie’s call of the game still sticks with me today. Since then, my family has always had Miami season tickets and attended nearly every home game for the next three decades. 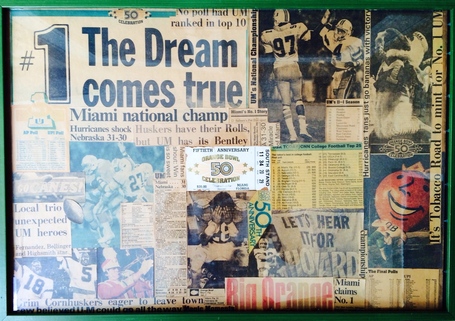 During the countless hours we spent together on the uncomfortable seats at our beloved Orange Bowl, my Dad taught me several lessons – which translate well to everyday life.

As a city, Miami isn’t known for having the most loyal fans (see Miami Heat Game 6, 2013). If more people grew up in my house, things would be different. We sat through blowouts in the rain until the clock read all zeroes. We watched Miami lose badly during the probation years of the mid 90’s. We were taught that there are only a handful of home games each season, so savor every moment. Sitting through the losses makes the next big win that much sweeter. That couldn’t have been more accurate given how much our family enjoyed the Canes’ magical run from ‘00-‘02. Never give up. Stay focused—good things are always around the corner.

Through good times and bad, we were taught to always support the guys suiting up every Saturday. You can boo the coaches, the ones getting paid big money, but nothing made us more upset than seeing players booed by their home fans. Effort and intensity is what matters the most in life.

My Dad was always confident Miami was going to win each and every game. While part of that attitude came from watching so much success over the 80’s and early 90’s, it became a mindset for our family. Despite being down large deficits at home to Louisville and Florida in the early 2000’s, I’ll never forget when my Dad turned to us and said prophetically, "We’re WINNING this game." Each offseason, we believed that anything was possible in the upcoming fall. It wasn’t a case of overconfidence or being spoiled from years of winning. Life is so much better if you have a positive attitude and believe in your own success.

I’ve carried these lessons with me every day of my life. And now, I look forward to passing them on to my son. Earlier this year, I became a father to a third generation Canes fan, and I couldn’t be more excited. He’ll be coming with me to Miami games as soon as he can walk.

My brother and I are very excited about our upcoming trip to Lincoln. I expect Miami to win and play well, but win or lose, the trip will be special. It represents something more than just football. Miami has an upcoming game at Notre Dame in a few years. "See you in South Bend – 2016."