After a closed scrimmage on Wednesday, cameras were back on the players Thursday morning as the Hurricanes took the field.

One of the more intriguing fixtures of Thursday's first practice was the offensive line and it's coach, Art Kehoe.

For those who don't know Kehoe, he is the stereotypical football coach; big belly, loud mouth.  Anything that comes out of Kehoe's mouth is pure gold.

We all know the classic campfire song "Camptown ladies sing this song doodah doodah," right? Right. Well, Kehoe sung the song to OL Danny Isidora on Thursday,but  with a little twist, which went

"I just got beat on the inside, doodah doodah."

Several defensive players, like Anthony Chickillo, sung Kehoe's song on their way to the water cooler.

Another beautiful Kehoe quote was caught on camera.

1) Art Kehoe at his finest

The offensive line and defensive line later met for another set of drills. This is where players got into it.

At first, the drill was going smoothly. Chad Thomas beat Suny Odowgu nicely on the outside. Also, Jonathan Feliciano was able to hold Tyriq McCord well, which is a good sign of no injury. 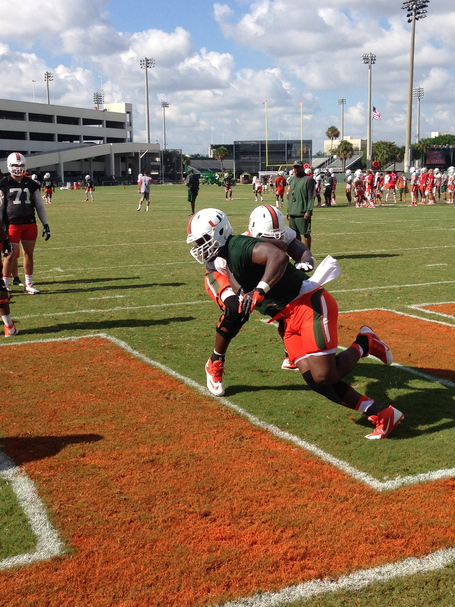 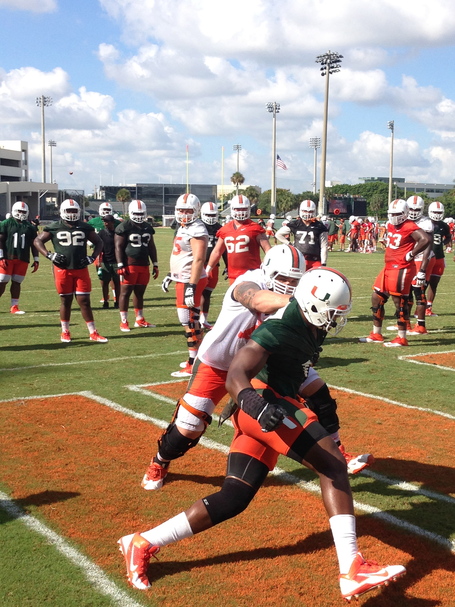 Shortly before the drills ended, OL Hunter Wells sparked what has been the biggest fight in camp so far. Earl Moore was in the middle of the skirmish, yelling at Wells. Two big piles were formed after strong efforts by Chad Thomas and others to pull players off. Michael Wyche had some choice words for Wells while he walked to the next drill.

About 5 minutes after the fight, Head Coach Al Golden went over to Wells and also had some choice words for him. Needless to say, Wells was at fault.

3) Wells after the fight 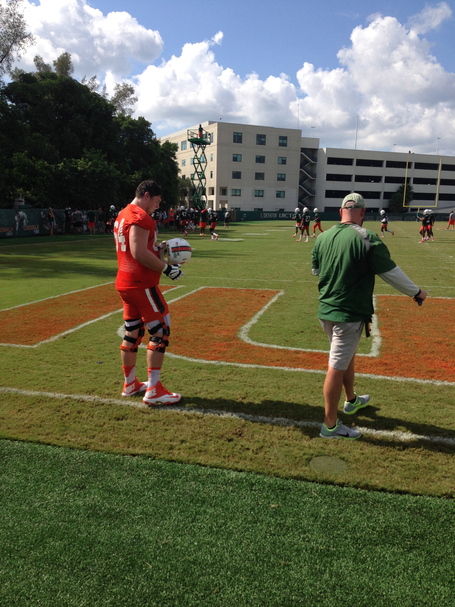 Towards the end of practice, Brad Kaaya led the first team through 11-on-11 drills. Kaaya almost had a ball picked off by Deon Bush on the right side. On the very next play, Kaaya threw a pick 6 to Jermaine Grace.

Senior LB Denzel Perryman was asked about his thoughts on Jermaine Grace.

Kaaya brushed off the bad throws and came back strong and poised. He threw a 15-yard pass to Stacey Coley, following an 8-yard slant route to Herb Waters.

The pocket had been collapsing all around Kaaya throughout the drill, however he remained calm and threw the right passes.

Safety Dallas Crawford was asked about his impressions of Kaaya. This is what he had to say.

Crawford mentioned Kaaya's pocket presence. His ability to sense pressure and react quickly is astonishing for an 18-year old.

6) Kaaya moving away from pressure 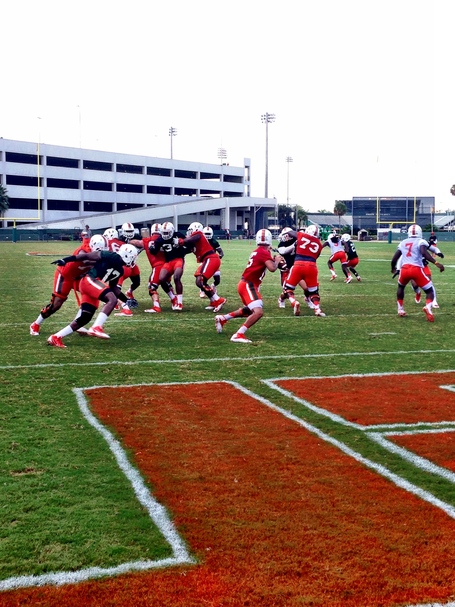 - Jake Heaps had a good practice. He made minimal mistakes on the field. Players seem to like his maturity on the field and how he's taken the role upon himself to be the leader of the team.

- Crawford spoke about Rayshawn Jenkins and his season ending injury.