Friday's practice came with it a lot of anticipation for the media. Players like Brad Kaaya, Braxton Berrios and Chad Thomas met with the press for the first time in an afternoon lunch.

Before the plethora of chik-fil-a sandwiches and dipn' dots were handed out, players took Greentree Fields for the final Friday of training camp.

One of the bigger shocks of the day was seeing freshman wide receiver David Njoku wearing a green jersey. Njoku was moved to linebacker. With the depth at the WR spot, Head Coach Al Golden wanted to see what Njoku could do on the other side of the ball.

"He's kind of a hybrid for us...We're going to explore different areas with him."

Njoku spent the day learning the position and getting involved in drills.

Practice went by slower than usual. Perhaps the angst for media day made it feel that way.

O-Line & D-Line drills were much more calm on Friday than Thursday, meaning no fights broke out. However, big hits were heard across the fields. On one side, Ereck Flowers punished Tyriq McCord with a vicious chest blow. On the other side, Trevor Darling did the same to Darrion Owens. 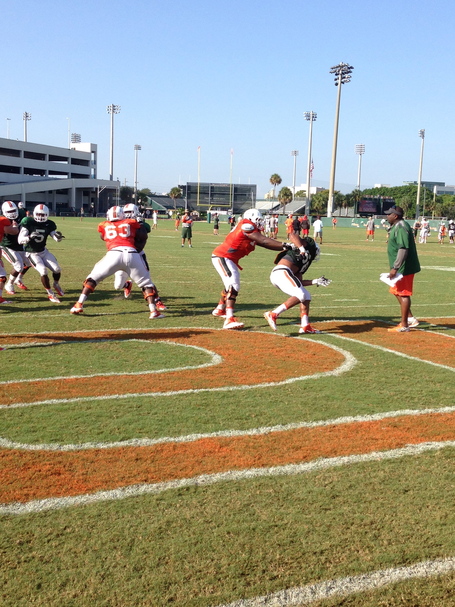 During 11-on-11's, Joe Yearby shined as he flew past defenders.

During the media lunch, I had the chance to speak with new Running Backs Coach Tim "Ice" Harris. Ice told me he sees improvement every day when it comes to Yearby.

"He has a fantastic work ethic," said Ice. "He learns from Duke a lot, and he's come a long way since just a few weeks ago."

Ice also spoke about the entire RB group as a whole. He mentioned that the funniest guy is Trayone Gray. Ice said Gray constantly makes jokes, which is good for a freshman to do. Stepping in as a freshman to a program like UM might feel intimidating. 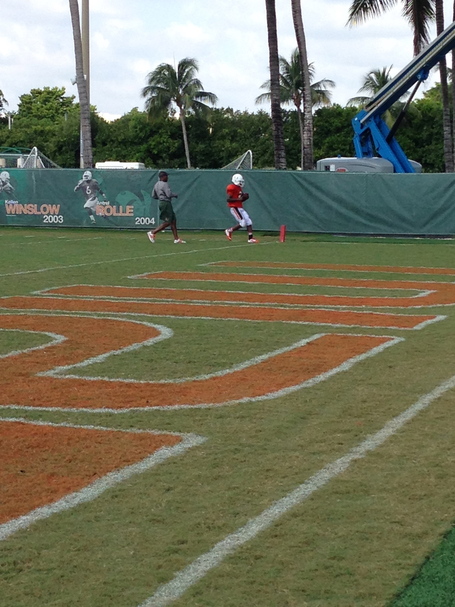 The man everyone wanted to talk to, however, was Brad Kaaya.

The quarterbacks all got their food and sat down at the same table. Being that it was Kaaya's first time with the media, most questions were directed at him, a few were asked to Jake Heaps and none were asked to Kevin Olsen.

Kaaya was asked about the competition between the quarterbacks. He praised Jake Heaps, saying they've watched over three hours of game tape some days, whether it'd be college or NFL.

After saying that he and Heaps are good friends, Heaps jokingly interrupted saying "so he thinks."

Throughout camp, Kaaya has become comfortable with Herb Waters. I asked Kaaya about his on-field relationship with Waters, here's what the young QB had to say.

"Herb's great. He's a guy I just seem to always find open. So far I have good chemistry with all wide receivers. They make it easier."

Another receiver Kaaya has a good relationship with is Braxton Berrios.

About a week ago, Al Golden said he'd like to see Kaaya be more vocal. Berrios addressed his teammates vocalness. He mentioned that Kaaya is a little laid back and called him a "Cali boy," and that he's a very relaxed man.

"I can't thank these guys (training staff) enough," said Berrios. "I can't believe how fast I was able to recover. They're really amazing."

The young receiver out of Raleigh, N.C said his Twitter name is "HNYNUT_BERRIOS" because the "Honey Nut Cheerios" word play is hilarious. Safe to say, Berrios is a genuinely nice guy that gives a great interview.

- Rashawn Scott will be out maybe 3 or 4 weeks. Not the entire season.

- Ice Harris said he "looked to the heavens and thanked God" when he first stepped on the UM practice field.

- Brad Kaaya and Demetrius Jackson said they are big fans of Rick Ross.

- Jake Heaps got married when he was 20, and the only places he's really been to in Miami has been South Beach once and Coconut Grove once.