Miami Hurricanes Football 2014: A Closer Look at the TEs with Larry Scott

WIth camp nearing its completion, we take a look at a key area on the team: the TEs. Last week I sat down with TE coach Larry Scott and took a look at what to expect from the position once the regular season starts.

Share All sharing options for: Miami Hurricanes Football 2014: A Closer Look at the TEs with Larry Scott 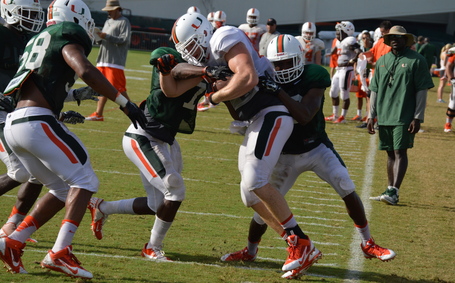 While the quarterback race has deservedly soaked up the majority of the attention, this camp one of the deeper groups on the team has also been hard at work in preparation for this year's regular season. They also come into this year with high expectations; and will be relied upon heavily to help out fellow position groups that may not have the same depth, talent, or experience. Having had the opportunity to observe both spring and fall camps, let's take a look at where these groups stand going forward into week one against Louisville. Today we look at the Tight Ends.

If we can get big bodied guys open over the middle we will go there, I promise. - TE Coach Larry Scott

Tightends: When the news came out that TE Clive Walford was going to return for his senior season, the position instantly became one of the strengths of the team. While most would agree he was under utilized, he still finished second on the team in receptions with 34, and also hauled in two TDs.

Walford sat out over the spring due to an injury, which allowed understudies Beau Sandland and Standish Dobard quality snaps with the first team, something that is paying dividends now. He returned to fall camp fully healthy and ready to go, connecting with both transfer QB Jake Heaps, and true freshman QB Brad Kaaya. While it is a small sample size, he has been more active over the middle so far this camp, something that just didn't happen last season. I spoke with TE coach Larry Scott about his lack of use over the middle (David Kenyon also has a great article on the usage of Clive Walford last year that you can check out HERE) and he told me the following, 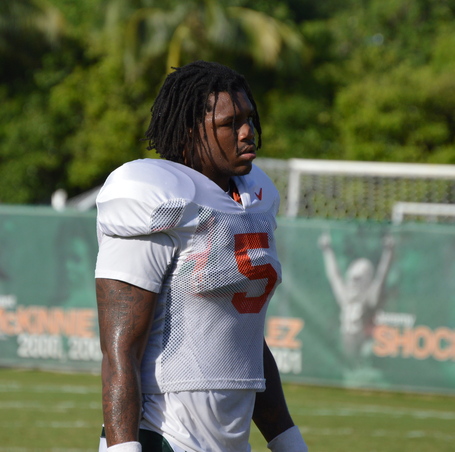 Dobard thus had a busy off-season. As I scanned over the team on the first day of spring he looked like a different player. He still stands 6-4, 255; but he now carries around muscle instead of the baby fat that he arrived with as a freshman. Coach Scott praised the work he has put in,

"He realized that it takes more than just the regularly scheduled conditioning; he went to work on his own. That's something that you typically don't see until a player gets older and matures."

Coach Golden also praised Dobard multiple times over the spring for the work that he was putting in. The work has clearly paid off. I was as impressed with Dobard as I was with anyone. He's big and powerful so you expect that part of his game to impress, but when someone his size makes multiple over the shoulder fingertip catches for big gains you take notice. Added Scott,

"Obviously he's talented, we just couldn't get it because the conditioning wasn't there."

He's kept impressing this fall, and as a result was named as the 1st team tight end on the teams initial depth chart. One also can not help but be impressed with his blocking,  something that almost guarantees his sees a plethora of playing time this season.

Not far behind however,  is another potential break out player, Beau Sandland.

"Beau has come full circle, there's a misconception that JUCOs will come in advanced but my feeling is that year two will be his year." - Larry Scott

Beau Sandland came to Miami last year after being ranked as the number one JUCO TE, which caused high expectations. While he played in all 13 games last year most expected more than  the 9 catches and 94 yards he produced, Coach Scott isn't worried,

" A big misconception is that players that come from a junior college are somehow fully developed. He came from a place where he was split out wide he never had to put his hand down or learn how to block for the run, that takes time."

Sandland was nagged by a hamstring injury throughout spring but is 100% now according to coach Scott. "Year two will be his year" he added - saying Beau has come full circle.  At 6-6, 260, I'm not sure I've seen him tackled by less than three guys this fall. He seems to be a step quicker than he looked in spring and seems way more active in the offense. Coach Scott says the game has slowed down for him lately whereas before he had to think things through before acting. "Got it, go play."

What to expect overall: This year Walford will be the man when it comes to one Tight End sets; though Scott seemed confident that later this season Sandland or Dobard will be able to fill in and provide fresh legs. As far as the second TE spot, it will be a rotation of three to four guys.

"We are in a different place this year, with our body types we are big enough, fast enough, and strong enough to  have three to four guys go out in an undefined role. Flex, hand on the ground, or in the slot they put in the work not to be pigeonholed into one role."

The players he has in mind for the rotation behind the top three are Ronald Regula (who he spoke of as a hybrid H-back) and Jake O'Donnell. O'Donnell is 6-7 and had a good spring prior to getting hurt the week prior to the spring game. A wild card to the group is Christopher Herndon who both Scott and Al Golden praised last week. With the depth of the position, I asked about the potential of Herndon red shirting. Scott answered that they have to see the way things play out going forward, but that every now and then Herndon will do something that makes everyone take a step back and added the freshman was,  "really gifted, his natural skill set is exciting."

The way I see it Walford will see the lion's share of the passes (with Sandland behind). Dobard has improved in pass catching but will still be used primarily to maul people.

All will be subject to quarterback play, but they should be a fun and much improved group to watch.

Stay tuned for more updates on SOTU as we count down to Louisville on Labor Day.