With speculation regarding the quarterback position; Brad Kaaya, Jake Heaps and Kevin Olsen took the field in what was an exciting first day of camp.

As rain and lightning hovered over Coral Gables on a hot and humid Tuesday afternoon, trainers and coaches prepared the brand new practice field for the first day of training camp.

With speculation regarding the starting quarterback position (Heaps, Kaaya or Olsen,) players and coaches weighed in on the QB battle before practice got going.

The 23-year old transfer is arguably the most mature man wearing the "U" on his helmet. He walked into a swarm of reporters, introduced himself and greeted everyone before questions began.

The smooth, eloquent nature that embodies Heaps is something of a true leader. When asked about the starting role, Humble Heaps gave the experienced answer.

"I don't think that's a question that I can answer, I think it's a question for my coaches and my teammates," said Heaps. "All I know is that I've come in try to be myself, work extremely hard, and take it one day at a time."

"He's a very mature guy, understands the playbook, came here ready to learn, ready to play. I'm excited to see what he can do."

As for the man suspended for one game for violating the drug policy, aka Kevin Olsen, Johnson said:

"That's where we come in. We help him through his one game suspension by being great teammates."

Offensive Coordinator James Coley was asked about maturity lack of maturity (Olsen), this is what he had to say

When asked about the actual suspension, neither Coley nor Olsen chose to comment.

Lastly, the freshman phenom who's created an immense bandwagon amongst the Hurricanes community (including myself) was talked about prior to practice.

Coming off of a spectacular freshman year last season, Coley praised Kaaya on how smart he truly is for a young QB.

With an absurd amount of people raving about the freshman, it was time for him to put on the pads and prove himself.

Kaaya began his 11 on 11 work with a beautifully thrown 20-yard over the shoulder out route pass. This caught the attention of coaches and media members.

Following that play was a remarkable 35-yard touchdown pass to Rashawn Scott. The accuracy of the throw is what impressed most people.

7) One more Kaaya throw to Scott

With Kaaya already building great chemistry with Stacy Coley and Rashawn Scott, choosing the right quarterback will be a difficult task for Al Golden and crew.

- Kaaya did throw an interception to Artie Burns towards the end of practice.

- Although Kaaya seems like the best choice for me, I believe Jake Heaps will likely be the starter come Labor Day.

-Trayone Gray is practicing tomorrow, meaning the vines will be awesome.

-Former Canes Hoops player Raphael Akpejiori attended his first football practice as TE. According to Manny Navarro of the Miami Herald,  Akpejiori said he worked with Jimmy Garaham and Santana Moss all summer on route running and catching. Here he is talking to a reporter. 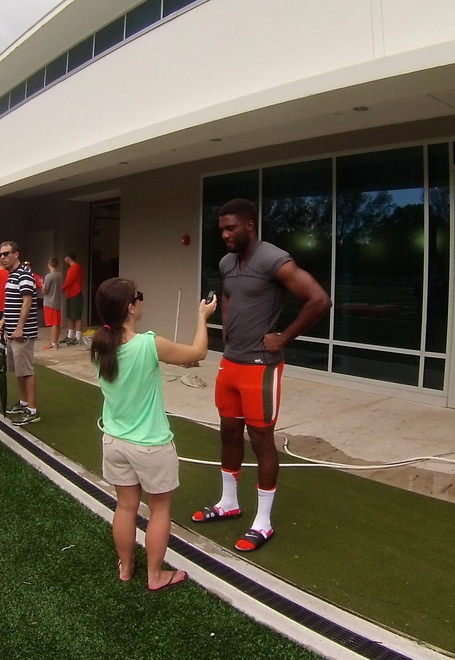