Miami kicked off it's 2014 preseason camp today as they prepare for the regular season and week one match-up against Louisville. Day one offered up a first look at how the freshman class stack up as Hurricanes as well as an actual storm that delayed the start of practice until the lightning passed. It was also a chance to get to see who might separate themselves as the starting QB.

The only player listed on the injury report by Miami was QB Ryan Williams who is in the process of rehabbing an ACL tear that occurred during the spring. He was on hand for the practice taking part in some drills. He was wearing a large black brace which seemed to be in style as there were three other QBs also wearing braces. Not exactly sure the cause other than precautionary but if that's somehow a nod to Williams I like it. 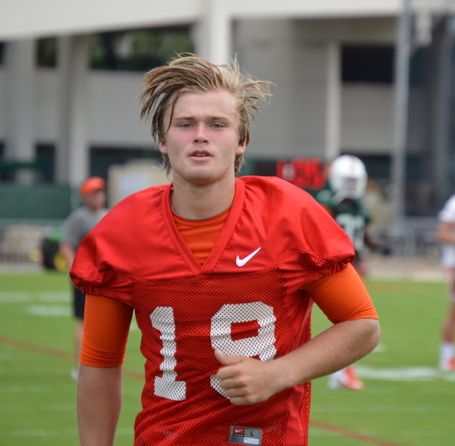 While on QBs let's get the QB WATCH 14 update outta the way. Jake Heaps ran with the first team the majority of the day. Nothing special, nothing terrible. The coaching staff said the plan going forward is to give each QB a full practice to run the offense. It's day one so there wasn't full contact 11 on 11 drills going on but Heaps had a few good throws but also an interception. He wasn't left in the dust by any of the other QBs though. True Freshman Brad Kayaa and Malik Rosier both had their highs and lows. Kayaa may have had one of the better throws of today connecting with WR Rashawn Scott. After day one I think the position is what we thought it was going in. Heaps has the experience and Kayaa seems to have the highest ceiling, but also has a lot to learn.

What all the QBs learned today is that they have a damn good group of receivers. Rashawn Scott looked good today with a few big plays. He had a great spring so hopefully this continues into the season. Malcolm Lewis moved well and Stacy Coley seems able to break off a 50 yard play at will. Phillip Dorsett is back at 100 percent as is TE Beau Sandland. Sandland wasn't quite full speed over the spring so it was nice to see him active in the offense. The freshman looked good as well, with Braxton Berrios and Tyre Brady mixing in a few good catches while David Njoku showed off his 6-4 frame when he went up high to try and catch an overthrown ball. 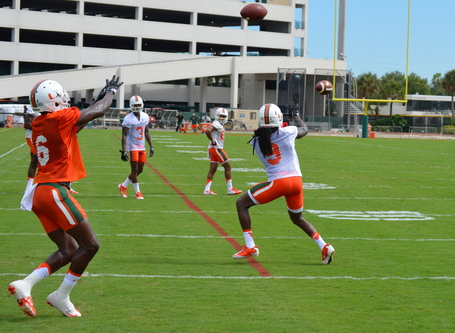 Duke Johnson was back. He looked good, changing direction and making cuts at full speed. The same could be said about freshman Joseph Yearby. Yearby looked just like he did in his Miami Central highlights on a play today when he was able to use his vision to make a jump cut and get into the open field. Gus Edwards was quiet but with his running style it seems like he should make his impact when the team switches to full pads this weekend. Trayone Gray was in street clothes today, but figures to fit in with the RBs Day 2 as he was cleared for practice. Walter Tucker was back with the LBs today, it's unsure if he will stay there but the move makes sense depth wise. 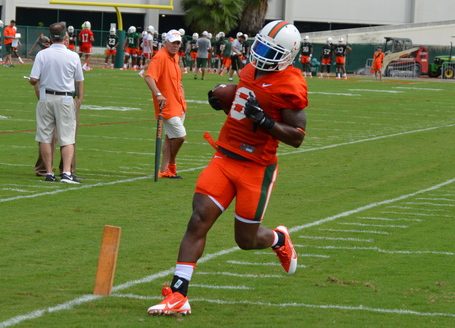 The Canes offense had 11 players donning orange jerseys on Tuesday: Phillip Dorsett, Jonathan Feliciano, Ereck Flowers, Danny Isidora, Duke Johnson, KC McDermott, Shane McDermott, Ronald Regula, Beau Sandland, Clive Walford and Herb Waters. Some of these names are no brainers while some are a result of hard work over the offseason. It's day one but seeing young players listed like Owens and Harris is good to see.

Biggest improvment I noticed was in the punting. New punter Justin Vogel is a major upgrade over what Miami had during the spring. It won't live up to last year but believe me when I say Vogel is an important addition.