With first day jitters out of the way, players were ready to hit the field and perfect their craft. Newcomer Trayone Gray was out there.

A lot of intrigue came with Wednesday's practice. What seemed to engulf the entirety of Canes Twitter was a man by the name of Trayone Gray.

Where is Gray? Can he qualify? Can he play? These questions have been asked profusely over the course of the last few weeks. 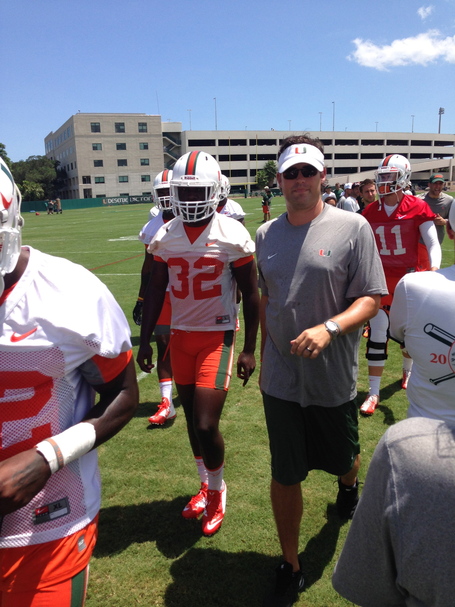 Initial thoughts were that Gray would rock either the 1 or 10 jersey, but the 32 looks nice on him. Gray's first day of practice was like any first day of a job; employees guide you and give you tutorials on how everything works.

Gray participated on every running back drill of the day. With a coach like Ice Harris showing you the ropes, it seemed like a good start for him.

Gray did participate briefly during the 11 on 11 and caught a screen for about 17 yards. After practice, Coach Al Golden had some things to say about the young back.

Another day and another evaluation of the complicated QB situation in Coral Gables.

Brad Kaaya, the freshman everyone loves to love came out to Day 2 of practice and shined once more.

His stance, his positioning, his throwing ability are all traits of an experienced Quarterback.

During the 11 on 11's Kaaya threw a thirty yard pass that practically landed into the arms of Malcolm Lewis.

"He's really really mature," said Golden of Kaaya after practice. "His length really stands out. His length and ability to see."

Ryan Williams also threw some good balls today, unfortunately, due to his injury, his footwork is still off.

Yesterday, Williams was asked if he would be ready for the Nebraska game.

***
The wide receiver group hopped onto the new turf for some individual route running drills.
4) Dorsett, Coley, Waters and Lewis
5) Pretty Route Running: Waters and Coley
Not much can be said about this group. Regardless of who the QB is, they'll have plenty of improved weapons to work with.
With Dorsett coming back stronger, healthier and faster, this WR core should improve tenfold.
Dorsett recently ran a 4.19 40, and he was even shocked at that NFL speed.

"I second guessed it," said Dorsett. "It was a great feeling, knowing I've been working that hard."

***
It was day to forget for Raphael Akpejiori.
6) Akpejiori can't get his feet up
7) Akpejiori drops ball
With dropped balls, badly ran routes and careless mistakes on the most basic of drills, the basketball turned TE needs to take advantage of the time given to him on this team and better himself as an all around football player.
Akpejiori was the last one on the field at the end of Wednesday's practice. He stayed working with the ball machine making sure he'll never drop another ball again.
***SIDE NOTES***
- WR Darrell Langham is expected to report to camp on Friday.
- Here are Al Golden's full thoughts on Brad Kaaya so far