Kaaya, Heaps excel during 7 on 7's. First fight breaks out. Langham will be on campus tonight.

Six minutes into the fourth day of camp, and once again lightning delayed practice. Fortunately, after thirty minutes, players finally took the field.

Throughout Thursday's practice, I mainly focused on the play of Michael Wyche and Demetrius Jackson. Both are very intriguing in the sense that fans are yet to know what they will bring to the field.

However, Friday I put some focus on senior Anthony Chickillo.

Since last year, Chickillo looks much stronger and agile. When asked about who the hardest defensive lineman to face is, OL Ereck Flowers it was Chickillo.

"Anything you can do, I can do better" seemed to play a major role in the competition between the two QB's

On one field Jake Heaps connected with Stacy Coley on an accurate 40-yard touchdown pass during 11-on-11's.

On the other field, Brad Kaaya hit D'Mauri Jones on a 25-yard slant route over the middle. Kaaya then rushed his players to the line of scrimmage, clocked the ball and hit his receiver for this touchdown.

During 1-on-1 work, both Heaps and Kaaya again went at it. There ability to hit receivers in stride, on quick releases has set them apart from the rest.

Unfortunately for Jake Heaps, he played badly throughout the last bit of practice.

Heaps threw an interception to Antonio Crawford, had a ball batted down at the line and threw two more bad passes that almost wound up in the hands of the defense.

Here's what Head Coach Al Golden had to say about Kaaya following the practice.

-Michael Wyche is not a better receiver than Jonathan Feliciano

-The first fight of camp broke  out on Friday between Herb Waters and Rayshawn Jenkins. Here's a screen grab. 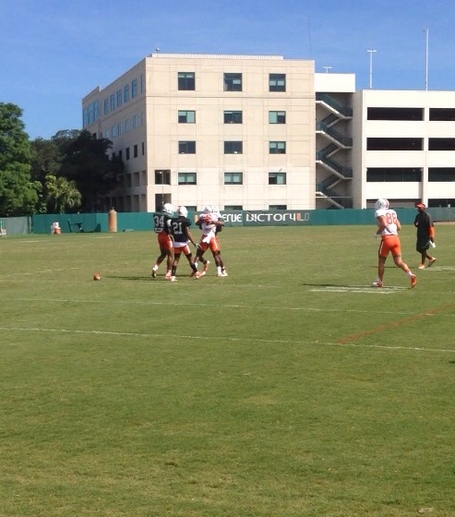