The follow-up to my story about family, tradition, and learning life lessons through college football. Miami's visit to Nebraska is just five days away. Expect the Canes to be ready. Nebraska's fans have already shown their true colors.

Share All sharing options for: A Special Trip to Lincoln, Nebraska - Part II

Last month, I published an article that I am very proud of. I told a story about my dad and described why my upcoming trip to Lincoln would be special. I talked about family, tradition, and what it means to be a college football fan. If you didn't get a chance to read it, HERE IS THE LINK. To those who did, thank you for giving me the opportunity to share it.

In the days following the article's release, I heard from dozens of Canes fans. Many of them shared their own stories about their connection with UM football. Some had fond memories of Miami Nebraska games in the 80's and 90's. A few former prominent Miami players even reached out and told me about their relationships with their fathers. I was sincerely grateful for all of the support and was glad my story had resonated with so many others. The reaction I wasn't expecting, however, came from Nebraska fans.

I've been to more than 40 college football stadiums and have seen every type of fan along the way. Wearing a Miami jersey or shirt to an opposing stadium often drew a venomous reaction, especially when UM was dominating college football back in the early 2000's. I wasn't able to make the trip to the Rose Bowl to watch the 2001 Hurricanes win the National Championship, but I consistently heard the same reaction from those Canes fans that made the trip. Everyone went out of their way to talk about how nice the Nebraska fans were. I recently experienced it first hand.

The article about my trip to Lincoln was reposted on a few Nebraska websites. My twitter feed was soon filled with comments from Nebraska fans. Every single response was positive, with Cornhusker fans telling me how excited they were about my visit to Lincoln. Much to my surprise, one person tweeted at me and said he was able to set me up for a tour of the stadium. I was skeptical at first, because I once heard that you can't believe everything you read on the internet. But I followed up and was soon connected with someone at Nebraska. After just one phone call, I was confirmed for a tour of Memorial Stadium on gameday. I am thrilled to get an opportunity to see the stadium up close. The people of Nebraska showed their true colors and offered kindness and generosity to a total stranger and an opposing fan. Thank you for helping to make this trip extra special for my family. 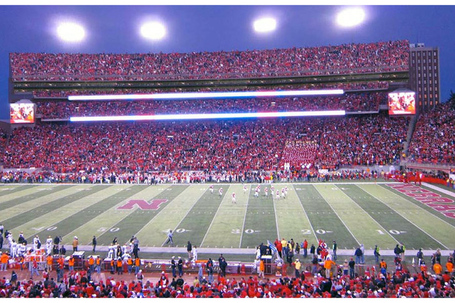 I've always maintained that college football is the best sport in America and we saw perfect evidence of that on Saturday night. The passion and tradition is unmatched by other sports. I returned home from Miami's convincing win over Arkansas State and settled in to watch a night of football that on paper, seemed to be filled with mismatches. As we've come to realize in this sport, expect the unexpected. Without Brett Hundley, UCLA was on the ropes against Texas, but Jerry Neuheisel made the throw of his life to win the game in the final minutes. The Kentucky Florida game was filled with drama throughout and Will Muschamp's team survived by the slimmest of margins in triple overtime. My favorite game of the night was Boston College's shocking upset of USC. The emotional story of Welles Crowther is so powerful and BC was able to use that energy and strength to physically dominate the Trojans. There's nothing better than watching fans rush the field after a win.

On Saturday night in Lincoln, I expect Miami to play with a chip on their shoulder. I've been annoyed by the negativity of Canes fans since the Louisville loss. Somehow, people were already losing patience with Brad Kaaya after two games. I didn't hear much from those fans after Kaaya threw several perfect deep balls on his way to a breakout performance against Arkansas State. I know the stats. Al Golden and his staff haven't been able to win big games at Miami. I can see why people are skeptical of Miami's chances of going to Nebraska and winning at night. Canes players know that the media and even some of their own fans aren't giving them a chance. This is a huge opportunity for this program to take a significant step forward. This past weekend, for the first time in recent memory, I saw some real excitement and emotion on Miami's sideline. The players were pumped up by the strong showing on offense and will head to Lincoln confident. I'm not going all the way to Nebraska just to watch Miami lay an egg. Keep believing in this team and don't be surprised when the Canes return to South Florida with a 3-1 record. I'll preview the game and give my picks for the weekend in my article on Thursday.

You will read a lot this week about the impressive college football history of the Miami vs Nebraska rivalry. Both teams have always shared a mutual respect, despite meeting so many times with title implications on the line. Miami won their first National Championship by beating the Huskers in the 1984 Orange Bowl. The Canes won 23-3 in the 1989 Orange Bowl and then clinched another title by winning the 1992 Orange Bowl. Nebraska returned the favor though, defeating the Canes in the 1995 Orange Bowl to seal their own National Championship. The last time these teams met was in the 2002 Rose Bowl, when Ken Dorsey and company finished an undefeated season in convincing fashion. The renewal of this historic rivalry is great for college football. I expect an outporing of hospitality from the fans in Lincoln this weekend and hope to return the favor in 2015 when Nebraska visits Sun Life Stadium.

Enjoy the week of hype for this game. I can't wait until I land in Omaha on Friday afternoon. After six long years of having it on the calendar, it's finally here. For me, this trip is about more than just football.