Lincoln here we come. I preview the Miami Nebraska game and make my picks for this weekend. It’s time for this program to change the narrative and take a major step forward.

“If I could just be totally honest, there was no way on God's green Earth that Nebraska had a chance.” – Maurice Sikes

That quote is from a terrific article by FoxSports that came out yesterday. It’s called “Miami Hurricanes’ pursuit of perfection in 2001: an oral history.” After you finish reading my weekend picks, I highly recommend you check it out to get fired up for Saturday night’s game. Sikes was talking about the 2002 Rose Bowl, which was the last meeting between Nebraska and Miami. A lot has changed since that game and this matchup looks much different on paper. Nebraska is a touchdown favorite and nearly everyone is giving the Huskers the edge, playing at home against Miami’s freshman QB Brad Kaaya. I’ll start making my way to Lincoln tomorrow and couldn’t be more excited. The Canes have an opportunity to prove something to the college football world. The players and coaches can sense that even their own fans doubt their ability to win on Saturday.  It’s time for this program to change the narrative and take a major step forward.

The atmosphere will be electric in Lincoln on Saturday night. This crowd will be a much bigger factor than what the Canes saw at Louisville on Labor Day. Al Golden says his team is ready for the noise, but we’ll find out early on if that is the case. I’ll do my best to make noise when Nebraska has the ball, but it is unlikely QB Tommy Armstrong will be distracted. Nebraska is a tough team to figure out, struggling to beat McNeese State and pummeling FAU and Fresno State (both have horrendous defenses). RB Ameer Abdullah is one of the best offensive players in the nation and Miami’s improved defensive front will be tested. It is crucial that the Canes establish the run in the first half and take some pressure off Brad Kaaya. That being said, James Coley needs to stay aggressive and give Kaaya the chance to take some shots down the field early. Nebraska will struggle with the speed of Phillip Dorsett, and Stacy Coley is thankfully back from injury for the Canes. Duke Johnson is the key to this game in my opinion. We haven’t seen a truly impressive performance from Duke this season. He was bottled up against Louisville through most of the night, and didn’t play four quarters against FAMU and Arkansas State. He should be fresh and ready for 25 carries on Saturday night. If Miami’s offensive line can control the line of scrimmage, the Canes have a great chance to pull the upset.

My role on State of the U has always been the “Glass Half Full” Miami fan. I cannot stand the constant negativity from fellow Miami fans, especially directed at the coaching staff. I’ve been just as upset by the Canes inability to win big games under Al Golden, but I still have confidence this season can be salvaged. A win against Nebraska would give the Canes a huge boost in morale and springboard this team into the heart of the ACC conference schedule. We will look back on this Saturday night in Lincoln as the moment Miami rejoined the national conversation. Brad Kaaya will remind fans why everyone was rooting for him to win the starting job this summer. The Canes win a close game and celebrate with me in the stands following the game.

Follow me @JPickens15 for pictures from my tour of Memorial Stadium on Saturday morning, as well as during the game. I’m looking forward to the hospitality in Lincoln from all of the Nebraska fans that have reached out to me. 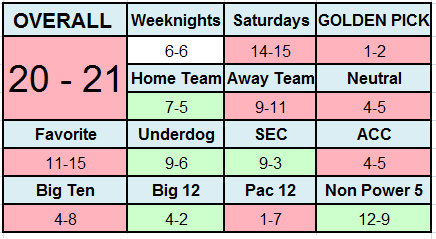 I was very happy with my 8-5 record on picks last week. The winning performance almost brought me back to 50% on the season and gives me some positive momentum. Had Chuckie Keeton and Brett Hundley not gotten injured before halftime, my record might have been even better on Saturday. There is more green on my stats table now, clearly showing how successful I’ve been in the SEC this season. I’ve been great when picking underdogs, but have been awful in the Big Ten. What does all this mean for my Miami pick against Nebraska? Probably nothing, but Go Canes.

Auburn has been a covering machine under Gus Malzahn. The Tigers bring their high-powered offense to the Little Apple for one of the biggest Thursday night games of the year. Everyone is picking Kansas State to keep things interesting at home, but I just don’t see it. The genius of Bill Snyder is well-documented, but his defense just isn’t good enough to slow down Auburn. KState gave up three offensive touchdowns to Iowa State and Auburn QB Nick Marshall should have a huge night. You might hear that infamous K….S….U….WILDCATS chant early when Jake Waters finds Tyler Lockett for a touchdown, but Auburn will control the line of scrimmage and eventually win by double digits.

What do we make of Virginia Tech this season? The Hokies dominated Ohio State in Columbus, but were embarrassed for much of the game in a loss at home to East Carolina. Georgia Tech has issues on defense, but the option attack is off to a good start led by QB Justin Thomas. He is a better passer than Paul Johnson’s recent quarterbacks so Bud Foster won’t be able to play as aggressively as he has in years past. VT QB Michael Brewer has been inconsistent in his three starts for the Hokies. This game will remain close throughout and I won’t be surprised if the team with the ball last wins. Georgia Tech hangs around and has a chance late.

This pick is all about my distrust of Wisconsin QB Tanner McEvoy. Wisconsin doesn’t believe in his ability to throw downfield and won’t be able to blow out Bowling Green. RB Melvin Gordon will have a big afternoon, but BGSU can put up points on anyone, even without Matt Johnson. James Knapke took over for the injured Johnson at QB and led the Falcons to an upset win over Indiana. BGSU put up 571 yards against the Hoosiers and ran an incredible number of plays in Coach Dino Babers’ fast-paced offense. Wisconsin wins by just two touchdowns.

Pitt RB James Connor is one of the toughest players in the country. He’ll have a big day at home. Pitt was embarrassed with their performance on the road at FIU and I expect a much better showing Saturday. QB Chad Voytik will do just enough to keep Iowa from loading the box all afternoon. Pitt WR Tyler Boyd is an electric playmaker downfield. The Hawkeyes have been very disappointing and the loss to Iowa State was pathetic. QB Jake Rudock will struggle on the road and Pitt moves to 4-0.

Hawaii has looked better in 2014, but the Warriors now have to travel to the mainland, where winning will be a lot more difficult. Colorado has improved significantly and I like QB Sefo Liufau. He’ll find his star WR Nelson Spruce early and often. Colorado put up 545 yards against Arizona State and could’ve won if not for three devastating turnovers. If the Buffs can protect the ball, they’ll move to 2-2 on the season.

Michigan will rally around embattled HC Brady Hoke in an absolute must win game for the Wolverines. RB Derrick Green ran very well against Miami OH last week and I expect WR Devin Funchess to give it a go on Saturday, despite an injury. QB Devin Gardner must protect the ball and make better decisions than we saw him make at Notre Dame. Michigan has an advantage playing at home, with Utah making their first road trip of the season. The Utes have been great on offense to start the season, but Fresno State and Idaho State both have terrible defenses. While I’ve always liked QB Travis Wilson, I expect the Michigan defense to continue to play well and slow down Utah. Michigan wins by a touchdown by controlling the line of scrimmage and playing “Man Ball,” allowing Brady to keep his job for another week at least.

It’s time to see how much Florida has improved in 2014. The Gators were not impressive against Kentucky and if not for a career night from WR Demarcus Robinson, Will Muschamp’s agent might’ve been very busy setting up a new landing spot. Alabama’s offense has looked good with QB Blake Sims at the helm. Florida CB Vernon Hargreaves III will try to lock down WR Amari Cooper in a matchup that has NFL scouts excited. I expect Alabama to have success on the ground with Yeldon, Henry, and Drake combining for 200 yards or so. UF QB Jeff Driskel will struggle against Alabama, especially after falling behind early in a hostile environment. The triple overtime game with Kentucky took a physical toll on the Gators and I expect Alabama to wear them out in the second half. Saban’s team wins by three touchdowns.

Mississippi State is one of the most underrated teams in America. I love the ability of QB Dak Prescott and he has a chance to make a statement on Saturday night. LSU wasn’t impressive in the opener against Wisconsin and it still remains to be seen just how good this LSU offense is. QB Anthony Jennings will be tested by the Bulldogs' aggressive defense. Miss State has a lot of confidence following an impressive 35-3 blowout win over South Alabama. LSU’s defense has shut out their last two opponents. (Sam Houston State and UL Monroe) This game should be low-scoring and expect the final margin to be a touchdown or less. Don’t be shocked if Dan Mullen’s team is able to pull the upset.

West Virginia is a team getting a lot of attention, thanks to the impressive start to the season by QB Clint Trickett. WVU is at home on Saturday night and Morgantown is a tough place to play. Trickett has two great WR’s in Kevin White and Mario Alford, but it won’t be enough. This Oklahoma team is different this season. The Stoops brothers have a very talented defense that has smothered opponents. Oklahoma QB Trevor Knight will make a few plays with his legs and sustain drives. Oklahoma will be without RB Keith Ford, but Samaje Perine and Alex Ross have had success this season on the ground. The Sooners win by two touchdowns on the road.

I’m not sold on Cal’s 2-0 start. Northwestern just might end up being a lot worse than we all thought. Cal QB Jared Goff will have a decent night, but the Golden Bears won’t be able to slow down Arizona’s explosive offense. Tucson is a tough place to play and the Wildcats have playmakers at every skill position. RB Nick Wilson has dominated the first three games of the season and young QB Anu Solomon has been impressive. Rich Rod’s offense keeps on rolling and the Wildcats move to 4-0.