Miami Hurricanes Football: Breaking Down the Ugly Truth in Photos/Videos

The 'Canes couldn't come close to stopping Ameer Abdullah and Nebraska's running game. There are several obvious reasons why.

Share All sharing options for: Miami Hurricanes Football: Breaking Down the Ugly Truth in Photos/Videos

7 of 10 third down conversions surrendered....

Let those numbers sink in for a second.

Let's break down how this is all possible.

Situation: It's the opening drive of the third quarter. Miami is down just 17-14. UM's offense has given them hope that they can stick with the Huskers. The D, while manhandled in the first half, should be making adjustments to a Huskers attack that was basically one dimensional. Nonetheless Nebraska takes the ball down the field 69 yards in 10 plays (3 passes netting 4 yards with 2 incompletions Vs 7 runs netting 65 yards) setting up a 6 yard Ameer Abdullah TD.  Nebraska faces only one third down the entire drive, and had they not fumbled an exchange between Armstrong and Abdullah to start the drive, would have scored even more efficiently.

Everyone in the building knows that on 1st and Goal they are likely going to ram the ball down UM's throat.

Despite everything described above, Miami's safeties are playing 8 yards off the ball.  UM shows a 3-4 look that is dependent upon some kind of inside push from the down lineman.  Something they did not get all night. 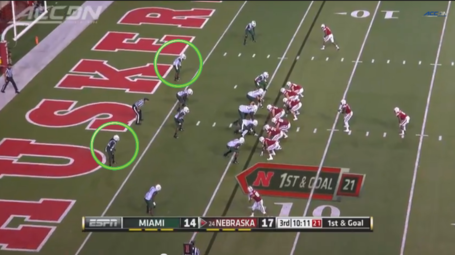 And here comes the run, as expected.  Despite an easy read for the LBs and safeties (the entire offensive line coming off the ball) none of the back 6 react to the play with the exception  Thurston Amrbrister (squared). With them playing so far off the ball to start with, they are already in a deep hole. 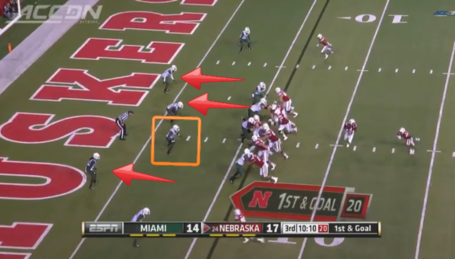 How can things get worse you ask?  Well, no one on the defensive line gets penetration or disengages their blockers. This allows the Huskers O line to get to the second level far too easily and creates a huge hole. Notice only Armbrister is waiting at the point of attack, and the three defenders who were playing so far off the ball AND reacted poorly are in no position to make a play with the ball in the hands of one of the best backs in the country. 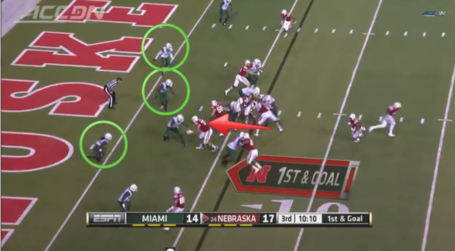 The LBs (even Armbrister) are 5 yards down field when they finally take on blockers. S Dallas Crawford attempts to work his way into the play but takes a bad angle and is clearly not squared up the ball. 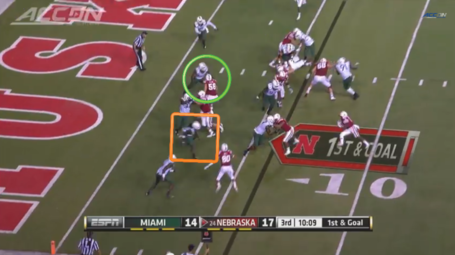 Armbrister can't get off his block.  Crawford makes a feeble attempt at a tackle because he is out of position. And Denzel Perryman doesn't do any better. 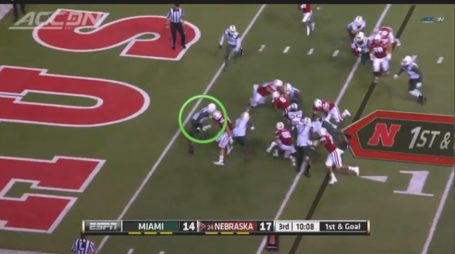 Here it is in full speed, no less horrifying:

A combination of poor positioning pre snap, awful reaction time, bad angles, poor tackling, and lack of adjustments by the staff and the players lead to a TD that is far too easy.

On a day when your offense and freshman QB put up 31 points on the road (even though they did give 7 back) you need better effort and design on defense.

Duke Johnson can continue to do the courageous thing all he likes and shoulder the responsibility because he fumbled.  But the fact is, Duke and the O did their jobs.

It was the D that failed Miami last night.

Plays like the one above can not continue to happen, whatever the reason, for the 'Canes to come close to having a successful season going forward.