How do Brad Kaaya's First Four Games Compare With Past Quarterbacks?

In his first four games, Brad Kaaya is statistically off to a better season than any Miami quarterback in the last 14 years.

Share All sharing options for: How do Brad Kaaya's First Four Games Compare With Past Quarterbacks?

As I sat in my data journalism class yesterday, my teacher pointed out a concept that grabbed my attention...data scraping.

Without getting into coding specifics and boring words, scraping is taking a set of numbers or a list from a website, and putting them on a spreadsheet. You simply punch in a small code, and an organized excel table is set up.

It occurred to me that a "data scraping article" would be interesting for Canes fans.

"How have Brad Kaaya's first four games faired against other UM QB's?" was the root question to the analysis.

Yes, Manny Navarro of the Miami Herald recently wrote a similar article. However, he mathematically projects Kaaya's numbers at the end of the season, while I analyze them as they currently stand.

I started looking up game logs from past UM quarterbacks to compare. Unfortunately, logs of quarterbacks from the 80's and 90's (Torretta, Kosar, Kelly) are no where to be found for now.

Ken Dorsey, Jacory Harris, Brock Berlin, Stephen Morris, Kyle Wright and Robert Marve were amongst those chosen for the comparison, and the results should please fans.

Stats from these quarterbacks first four regular season starts were taken into account: 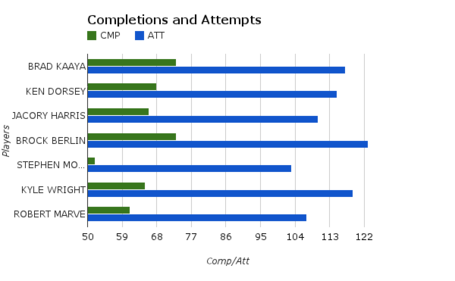 At this point, the disparity may not be as distinguishable. 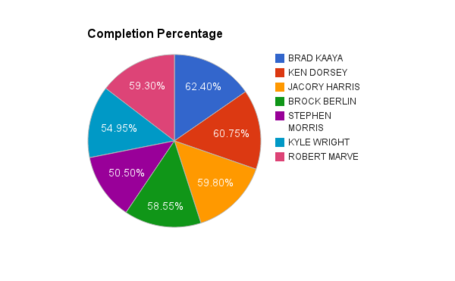 Kaaya and Ken Dorsey stand alone as the only QB's to start their first four games with a 60% or higher completion percentage. Kayya, as you can see wins this category once again with 62.40%.

The top competition in this category is once again between Kaaya and Dorsey.

Jacory Harris was closest in reaching Kaaya in yards, trailing him by 14.

Dorsey, did win one category though...QB rating. Kaaya's 7 interceptions to start the season made him lose.

Regardless as to how meaningless a few of his picks were, the 19-year-old QB does not seem to be a fan of excuses. Dorsey, who Kaaya said he looks up to, threw zero interceptions in his first four games. The true freshman is increasingly getting better, but he must minimize careless mistakes as he moves forward.

This article will either excite fans or upset them.

Kaaya and Robert Marve are the only QB's on that list to start their first four regular season games with multiple losses.

Marve is clearly the worst out of the 21st century quarterbacks, so losses were expected; however, how is a quarterback like Kaaya, who leads in almost every category, losing to beatable teams?

Well that's for you to decide.