As a rainstorm down poured on Miami's offense, Brad Kaaya took an impossible fourth down and 19, and turned it into 6 points.

As a rainstorm down poured on Miami's offense, Brad Kaaya took an impossible fourth down and 19 in the dead zone,

and turned it into 6 points.

A full play breakdown of Kaaya's 28-yard touchdown pass to Herb Waters below:

1) Kaaya tells Waters where to go 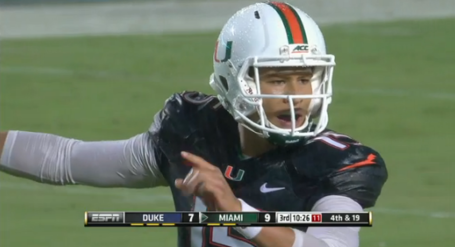 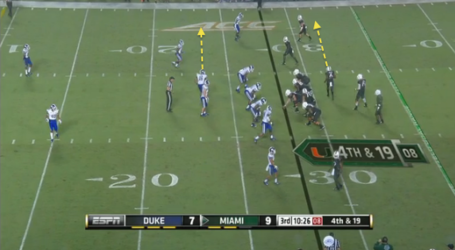 - Before the play, Brad Kaaya tells Waters to line up to the right of Braxton Berrios. Waters was originally lined up on the left side in the slot.

- Duke's Jeremy Cash, a hybrid safety/linebacker, follows Waters every step of the way.

At the time, Cash was leading the team in tackles with eight. 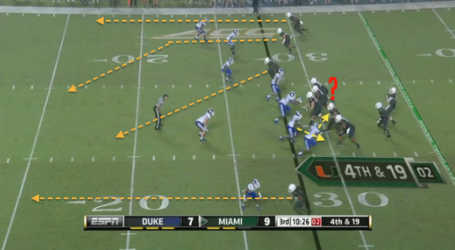 - Duke's defensive linemen make a switch. Instead of attacking on the inside, the big defensive tackle Carlos Wray takes on Ereck Flowers, while a much lighter and faster defensive end Jordan DeWalt-Ondijo took on Jon Feliciano.

Felciano did not anticipate the switch, which caused massive pressure on Kaaya. But more of that later.

- As for the routes, every receiver EXCEPT Waters had a route to the inside. Meaning the play was all or nothing for Waters to begin with.

After the game Kaaya said:

"If I throw a pick, no biggie, I've thrown them before."

Braxton's route ends up being one of the main keys to the success of this play. 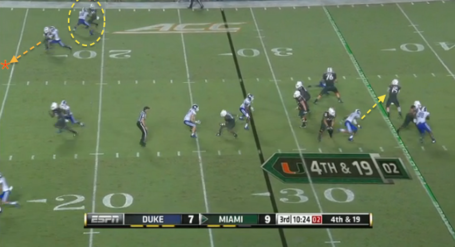 - Things get interesting in this portion of the play. Herb Waters collides with Jeremy Cash on the play.

- Kaaya is eyeing Waters all the way, so that collision is what keeps him from releasing the ball immediately.

- What Kaaya's not expecting though is the rush on the inside by Ondijo; however, he proves why he was the right choice at quarterback in one split second.

**SIDE-NOTE** : Braxton's route forces the safety up top, Deondre Singleton, to move towards him and not Waters. 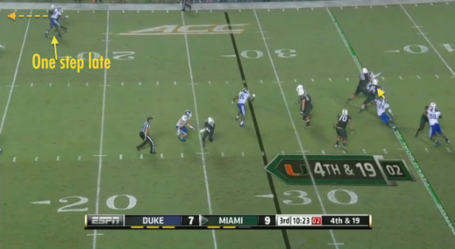 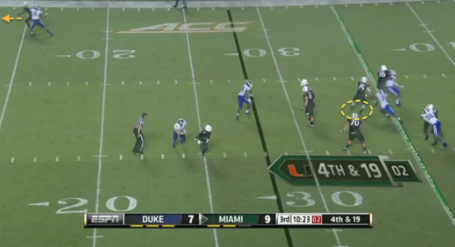 This gave him enough time and space to finally air the ball to Waters, who has one full step on Cash.

After the game Kaaya said that years of experience as a quarterback allowed him to move his feet. 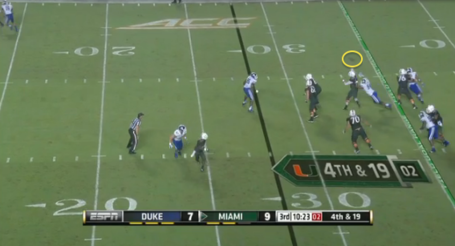 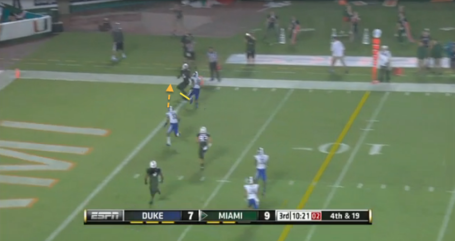 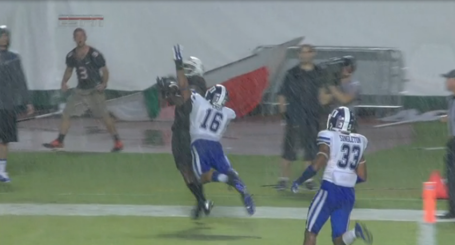 - Kaaya's last-second quick step gave him the inches necessary to get the ball out in time without Ondjio affecting it.

- Singleton, tries to make it back to Waters in time to make a play, but Berrios forced him inside too much.

- Notice Cash and how that one foot of separation never gave him the opportunity to turn around tip the ball.

- The effort on Waters' part to catch the ball with one big toe in bounds is great to see, especially after a lackluster game against Nebraska.