A few examples of the Miami Hurricanes Defense lining up closer to the ball.

"We didn’t change too much schematically. We executed better, we tackled better, we made them pay when we ran our pressures and our movements. From that standpoint, we went back to work. Everybody looked at the things that we need to do: first- and second-down efficiency, third-down efficiency. Third  down on defense was markedly better.."- Miami Head Coach Al Golden

Certainly the tackling was light years better than last week's effort in Lincoln.

264 total yards allowed (just 85 on the ground) and a spectacular performance on third downs (allowing just 2-16 conversions) are evidence of that.

And perhaps overall scheme was not dramatically different.

There definitely appeared to be more instances were the D loaded the box and showed pressure fronts.

Getting more men close to the line of scrimmage is not a panacea for all that ills a defense, but last night looked like a start in the right direction and definitely a sign that some adjustments were made.

Exhibit A - Feel free to scroll up and down to your heart's content.

The Skinny - 2 situations (albeit different opponents/formations and one was first and goal the other second and 1) where UM faces a high probability of facing a run. One from the 7 yard line, the other from the 6.   Notice the not too subtle difference in where the players are lined up in Photo 1 vs Photo 2. 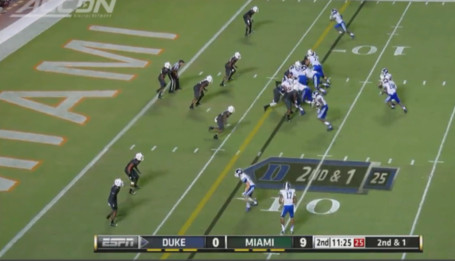 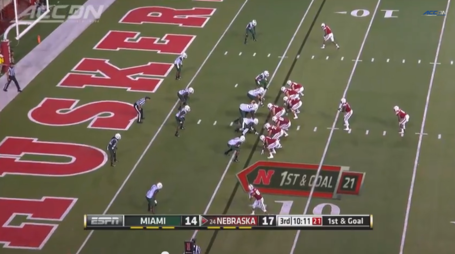 The 'Canes show two deep safeties, but still line up closer to the line of scrimmage. 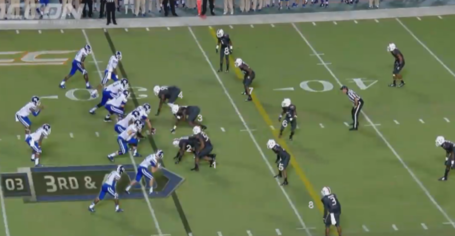 This time, just one deep safety, and 10 men withing 5 yards of the line of scrimmage. 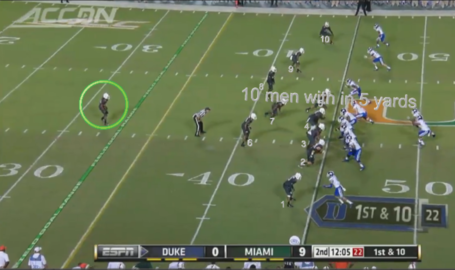 Make no mistake about it.  Al Golden, Mark D'Onofrio and the defensive coaching staff lined in more pressure looks than last week Vs Nebraska. Not to mention their corners played a lot more press coverage.

Josh Boone and Duke's offense were thus forced out of their comfort zone, and thew the ball deep down the field no less than 6 times by my count.

Had they converted more of them, yes, that strategy could have back fired.

But after last week's debacle I think most 'Canes have to be happy with the different looks of the defensive front, even if they were somewhat subtle.