Share All sharing options for: Miami Defense Needs to be Alert Vs Georgia Tech for More than just Triple Option

First of all it is important to emphasize that the Georgia Tech Yellow Jackets don't run a triple option offense.  The "triple option" is just one play.   It more accurately described as a "flexbone" option.

It is their bread and butter play, but not their entire playbook.   Paul Johnson's offense actually only runs that single play approximately 20% of the time.

Here's the design of it in it's simplest form: 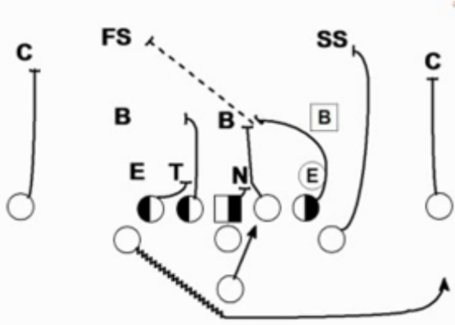 The "A Back" limes up in a sort of slot position, albeit much tighter to the line than a traditional slot, and comes in motion before the snap.

Essentially this puts GT in an I formation at the snap.

Option 1 is the full back up the middle through the A or B gaps.  This very basic concept puts a ton of pressure on the interior of the defense and is designed to occupy DTs an ILBs. Once that is accomplished, the QB can sneak out to the edge of the defense and create a 2 on 1 with himself and the A back putting a defender (usually an OLB) in a no win situation.

The play is obviously designed to pick up yards, first downs and TDs, What is also does is allow Johnson and the Jackets to set up the rest of their offense.  And it is the slight modifications off the triple options that not only keep a defense honest, but produce additional big plays.

Let's take a look at one of these differentiations,  A QB sweep off the triple option look.

Here you see the A back comes in motion with the full back 4 yards behind the QB.  GT has probably run the triple option out of this formation enough times at this point in the game that the defense is expecting it. 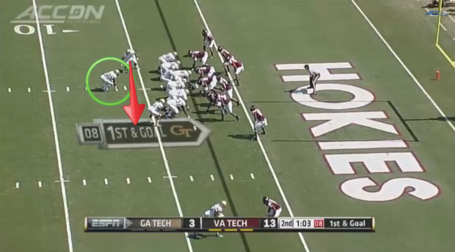 The defense is keyed in on the FB, but notice the subtle step to the right he takes, instead of coming directly up the middle.  The QB also starts a more circuitous approach instead of attacking the edge the way he does in the convention triple option plays. 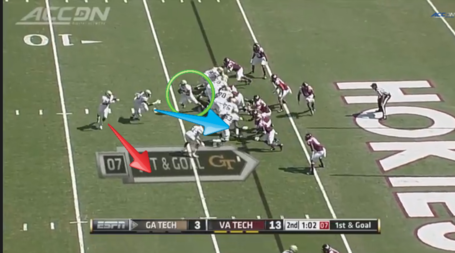 With the defense sucked to the middle, the FB and A back while no longer threats to be ball carriers, are now lead blockers for the QB. 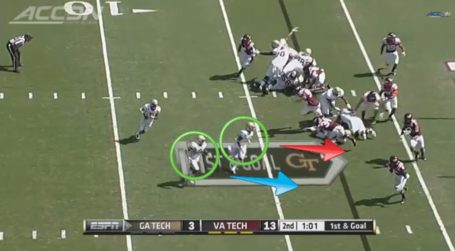 Now instead of a 2 on 1, you have a 3 on 2, with a dangerous QB in Justin Thomas (team leading 65 carries for 443 yards) following two seal blocks through a huge hole.  The defenders who were so worried about the triple option are forced to pursue, a step behind the play. 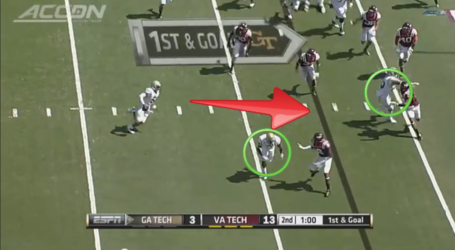 The blocks on the edge aren't even that great, but the play is successful nonetheless.  What's more, it gives the defense one more thing to think about next possession.

Here it is, start to finish:

Miami needs to tackle well, play assignment defense all night long, and ALSO be very aware of the variations that come off the triple option.  As illustrated above, Paul Johnson is the master of lulling a defense to sleep, and throwing a curve ball at just the right time.

GT also likes to line up two A backs and have the play side one come the opposite direction of the QB and option A back for a "rocket sweep" that has a reverse look. This too is something UM needs to be wary of.

The 'Canes are going to have to be alert to all of these subtleties in general.  Because while the offense may look simple on TV, it has just enough variety to be a pain to defend on the field.

If Miami allows itself to be sucked in to thinking every play is going to be the same, it could be a long night in Atlanta.