Coaches and Players Speak to the Media after FAMU Win

Share All sharing options for: Coaches and Players Speak to the Media after FAMU Win

-After Saturday's blowout win against FAMU, fans  worried that Denzel Perryman had injured himself. Perryman left the game in the third quarter with an ice pack on his right shoulder.

Fortunately, Perryman was back in his black jersey on Monday and Defensive Coordinator Mark D'Onofrio told the media he was fine.

"He played a physical game, he played to a high level, he demanded the same thing out of all his teammates." said D'Onofrio. "That's part of football, you're gonna be banged up, it's a long season."

- I asked D'Onofrio if he had any plans on redshirting Demetrius Jackson this season. Here's what he had to say.

"It's a long season, so to talk in terms of that, it's really hard in the second game of the year to have that be a finality with the way college football is today," said D'Onofrio. "To make that commitment to anybody at this point, I don't think we can do that."

- D'Onofrio praised Thurston Armbrister as well. He mentioned that Armbrsiter had a spectacular training camp, getting himself to 240 lbs. and maintaining that weight was crucial to the success of the defense.

"It's no surprise...He's playing at a high level with great effort every day, that's what's gonna come out on the field." said D'Onofrio. " How you prepare and how you practice is really gonna dictate how you perform on game day so it's no surprise."

- One defensive player that D'Onofrio was not asked about was Kiy Hester. The four star freshman defensive back had been rumored to be transferring to Rutgers over the last two weeks. It was finally addressed today by Head Coach Al Golden that Hester had been granted a release from UM. Hester had one of the best camps out of any freshman. His physical play and ball lurking ability would have been a great asset for the years to come.

However, Golden did not elaborate as to why Kiy Hester decided to leave.

-Golden also spoke about how the Louisville loss was not due to Brad Kaaya's confidence, but due to bad plays instead.

"We made some bad plays, let's be really honest, and that starts with me. I take accountability for it and responsibility for it." said Golden. "We made some poor plays that really helped the opponent. When you have unforced errors it's hard to win. Three times inside the 10, kick off returns, and a couple little silly plays...But the guys have moved on from that and are using it as motivation."

The silly play he alludes to might be the Phillip Dorsett attempted pass to Kaaya on third and goal.

- When Kaaya spoke to the media he was asked about his relationship with WR Braxton Berrios.

"I've known him since I was a junior in high school, since I was 17. We've been talking about the opportunity that we hoped to have and here it is now. Me and him have really good chemistry."

Berrios also spoke about the chemistry with the young QB.

"I helped him a little through the summer, we hit camp together, both trying to be in big roles, worked our way up." said Berrios. "On and off the field, whether it's classroom, football or personal, we've built a great relationship. We're just there for each other no matter what it is...we keep eachother even."

-Most fans leaped for joy on Saturday after watching Brad Kaaya connect with Phillip Dorsett on this monstrous touchdown.

Before Monday, I hadn't experienced first-hand how smart Kaaya was. I had only heard coaches and players praise his knowledge of the game. With his explanation of the play, I was sold.

Kaaya and Dorsett went in depth as to what exactly went on during the long play.

- Dorsett was later asked about his thoughts on the vehement reactions of fans after a win or loss. His reaction didn't sit too well with a few fans, but personally, I loved it:

With Donna Shalala announcing her retirement today, many people seemed overjoyed with her decision. Those who felt this sense of happiness, have clearly never met her. After my freshman year of college at FIU, I transferred to the University of Miami. During my short time at FIU, the only occasion I had seen the president of the school was from afar at my brother's graduation. I still don't even know the man's name.

Before even starting classes at UM, I was invited to a picnic at Donna Shalala's house, which is where we first met. The picnic alone made me sure of the fact that I was in good hands for my remaining time at UM. Days after, Shalala stopped by a fraternity philanthropy event where she introduced herself to all of us once more and took pictures. With dozens of other memorable events, Shalala saved the best for last by doing the ALS ice bucket challenge in front of the entire student body.

What I say with this is that football is only a tiny fraction of what it truly means to be a Miami Hurricane. Shalala made sure that every student that walked down the peaceful campus greens felt the same way players do while running through the white smoke. Whoever replaces the presidency spot has enormous shoes to fill. 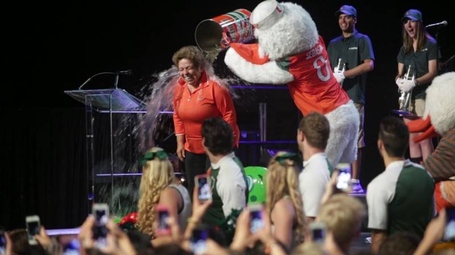