Anatomy of a 55 Yard Run: Duke being Duke

In a new installment on State of the U, we use images and video to break down one of the best plays of the week. Today we look at Duke Johnson's 55 yard run.

Share All sharing options for: Anatomy of a 55 Yard Run: Duke being Duke

There are very few College RB's out there as good as Miami's Duke Johnson.

Below we illustrate this past weekend's 55 yard gain by #8, that put him over 2,000 yards in his Miami career.

Note the patience, the vision, and of course the sublime cuts.

And to think, this run did not even display his best weapon - the stiff arm, and likely isn't even among the Top 10 of his career.

Nonetheless let's break it down:

The play starts simply enough.  Miami lines up with an unbalanced line (tight end to the right side of the formation) and two WRs to the left. The defense appears to be looking for a run to the right side as two of the LBs are creeping up on the TE side.  Brad Kaaya tosses the ball to Johnson who follows lead blocker Ronald Regula to his left. 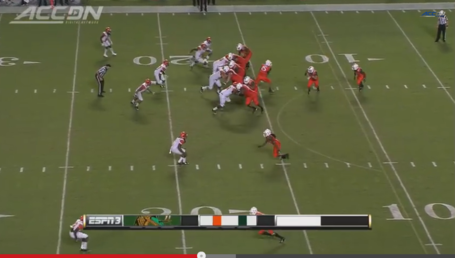 FAMU's defense converges quickly, but #74 Ereck Flowers makes an excellent seal block. Nonetheless they have pretty decent pursuit on the backside and a man on the outside to contain. 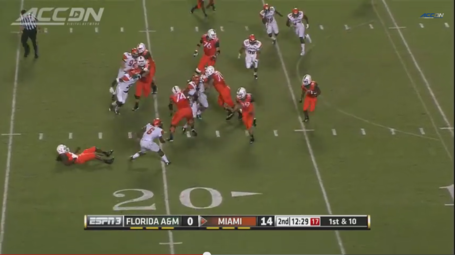 Regula does a good job getting out in front, ditto C Shane McDermott (#62).  But the Rattlers still have 6 men around the ball.  This is where talent takes over. Duke feels the defense closing on on his outside shoulder, stops on a dime, and plants his left leg. 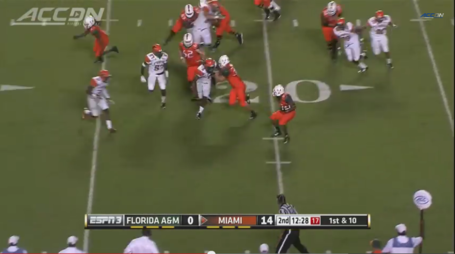 Regula and McDermott continue to finish out there blocks, but it is mostly Johnson's cut that creates the space. 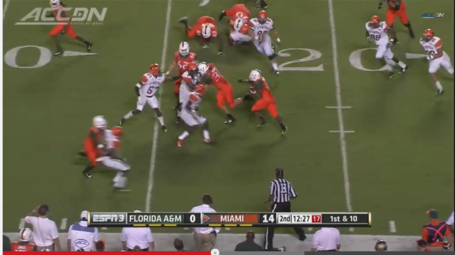 A handful of FAMU defenders are left in his wake, but he still has one that is still closing in. 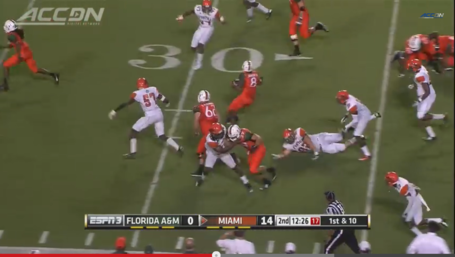 With another great move, a subtle backward cut this time off his right leg, he makes another man miss. 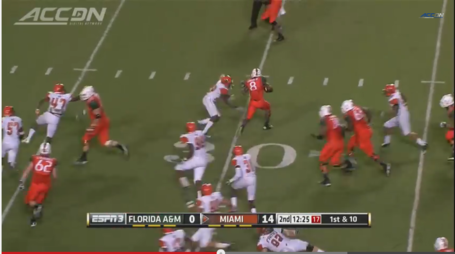 From there it is pure speed.  Johnson is eventually cornered but not before picking up a huge 55 yard gain. 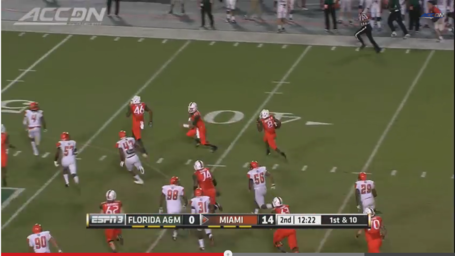 Now we put it all together in Video form for your enjoyment.

And that my friends is how it's done!

Keep an eye out for future breakdowns of Miami's best plays on a weekly basis.