The student experience at a UM home game is unlike any other, and I'll take you through game day from my perspective.

Home games at the U, especially home openers, are unlike any other day on campus. From the minute you roll drowsily out of your dorm room the morning of a home game, the hundreds of students decked out in orange and green are hard to miss. Preparations for these games start long before kickoff; it's a whole-day event that begins right when you wake up. For night games like this past Saturday's, the added prep-time just helps build the frenzy.

Allow me to take you through a game day in the life of a student, courtesy of the ‘Canes home opener against FAMU.

11:00 AM: I wake up, practically salivating over the thought of spending my evening at Sun Life Stadium watching ‘Canes football. The rest of campus is already up and hopping too-- an unusual sight for a Saturday morning-- despite the eight hours left until kickoff.

1:00 PM: It's time to layer on as much orange and green swag as I can find in my closet. I decide on my Al Golden shirt, with his signature orange tie painted onto the front. I draw the line at wearing khaki pants, though. My roommates do the same, and we're officially ready to rep the U at tonight's game.

2:00 PM: My friends and I head over to one of the many fraternity houses hosting a pre-game. The energy is already at a ridiculously high level, and it will only continue to rise as game time approaches.

3:00 PM: We leave the fraternity house and are bussed over in droves to the stadium for tailgating festivities. The bus ride over is just as exciting as the past hour has been, as students loudly sing and wave to other Miami fans who drive by on the highway in their bumper-sticker-clad cars. Horns are honking and U's are being thrown up, and there's no doubt in my mind that it's game day in Miami. 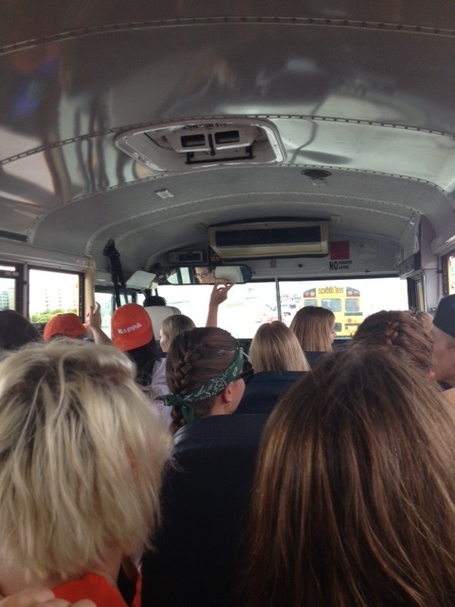 3:45 PM: We've finally made it to one of my favorite places in the city- Sun Life Stadium (I don't get out much...). It's been a year since I was last here cheering on my team, and that thought momentarily depresses me. This funk doesn't last very long, however, as I step off the bus and begin the trek to the stadium. I'm pumped. It's officially time for tailgating. 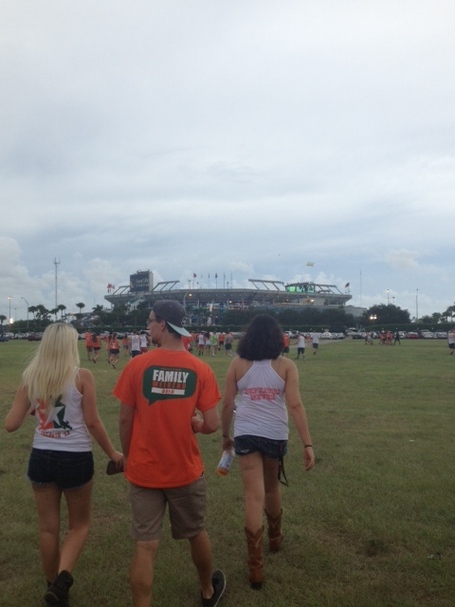 4:00 PM: The rowdiness is at its peak as students, families, and alumni pack into the parking lot surrounding Sun Life, setting up their tents and grills. Music is blasting and students are pouring drinks to their hearts' content (apple juice, soft drinks, and water of course!). T-minus 3 hours until kickoff. 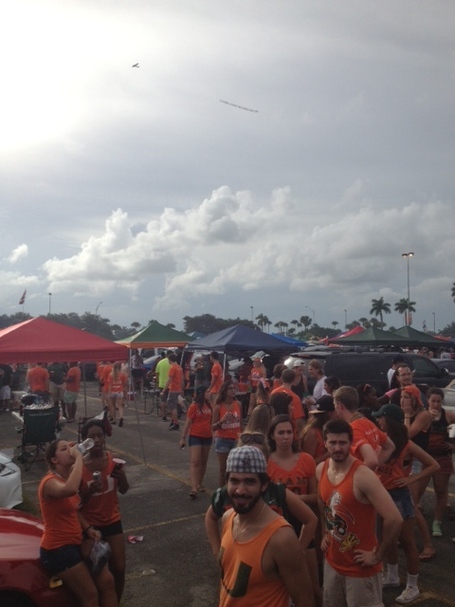 6:20: Pouring remains a theme, as fans begin to pour into the stadium in advance of kickoff.  The Band of the Hour is playing, the Hurricanettes are strutting their stuff, and everyone is finding their seat, united in their desire to make Monday night's debacle in Louisville nothing more than a distant memory. Welcome to Miami, Florida A&M! 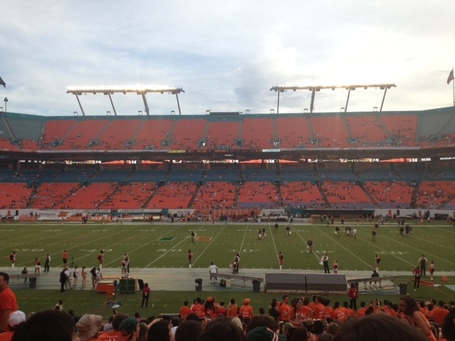 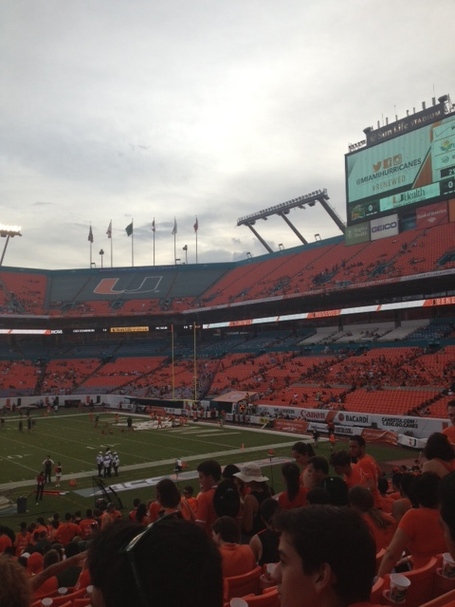 7:00: Surrounded by a sea of orange-- or rather, a lake of orange (this wasn't exactly a Florida or Florida State vs. Miami-sized crowd)-- the 'Canes jump out to a 14-0 1st quarter lead en route to a 41-7 victory over the visiting Rattlers. Despite the final score not being a blowout of epic proportions like many had hoped, loyal U supporters in attendance were able to enjoy an evening of winning football, festive music, the infamous ‘Canes spell-out, and of course, apple juice, soft drinks, and water. 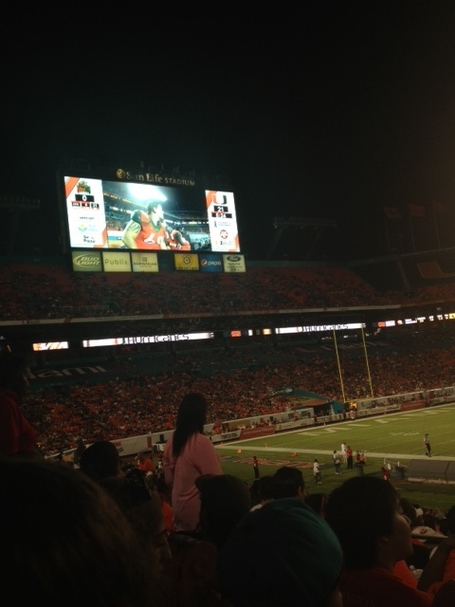 Something-o'clock: Really, we've been at a pre-game party, on a frat bus, at a tailgate, and then at the game itself... who even noticed what time it was when we boarded the buses back to Coral Gables? All that matters is that we put FAMU in their place while having the time of our lives. Next Saturday and Arkansas State can't come soon enough as far as I'm concerned.

On a day that began with excited fans throwing up the U, it's only fitting that game day ends with a little more throwing up. Hey, too much apple juice, soft drinks, and water in that heat can really wreak havoc on one's system! Until next time, ‘Canes fans.