As Mark Richt takes over the once proud Hurricanes and puts his imprint on Miami, I will take a look at his offensive scheme. Coach Richt comes back to Coral Gables with an offensive pedigree in coaching that includes Heisman Trophy winners, a national title, and numerous all-conference players, all-americans, and NFL draft picks. The first play under the microscope will be the inside zone lead, and the accompanying play-action passes and RPO's.

Above, the Canes are lined up in an I-Right base 21 personnel formation. The defense plays the 3-tech to the TE and while it's hard to tell the strong-side end looks head-up on the TE. It's a very nice look for a zone lead play. 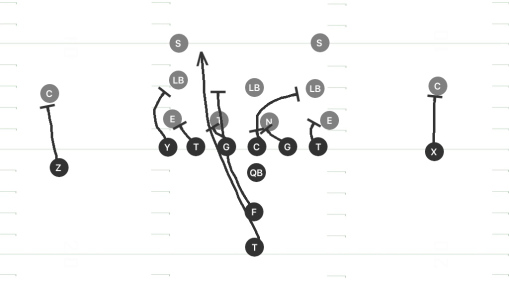 Zone Lead is different from single-back zone or split-zone especially out of the I and 21 personnel. You're not going to get as many 2-on-1 combo blocks because you have allowed the defense to play tight in the box. It will really become a man on blocking scheme unless the defense doesn't adjust. The lead block from the FB makes it an easy key for the linebackers but the assumption is this is a line up and kick ass type of play anyway.

As you can see in the GIF below, the 'Canes offense does just that. They line up and pick up 11 or 12 against a 4-3 defense. 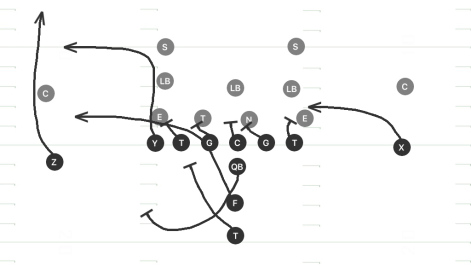 Complimentary to the Zone Lead play from the I will be play-action passing that Coach Richt loves to incorporate. He uses the Z to run off the CB and catch the eye of the safety while the Y runs a 7 an out. The FB runs a slip route out of the backfield into the flat and is open because of the play-action and route combination of the TE and Z. The X runs a very shallow cross. It is nice to see the fullback incorporated into the passing game again, which was a staple in Miami when Larry Coker and Rob Chudzinski were calling plays in Coral Gables.

As you can see in the GIF it's an easy low to high read of the flat defender here and goes for a nice gain of over 12.

I'm going out on a limb here and only because I am hopeful Richt's new offense will include RPO's and because I love RPOs, but I'm going to assume this play was an RPO (I also thought I saw stick/draw early on and Kaaya missed the read badly). 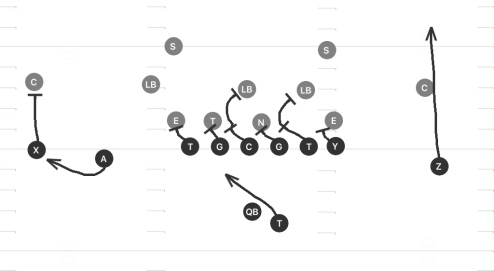 In the IZ RPO world Kaaya's job will be to read the box, count safeties, find the flat defender, and make a pre-snap read and a post-snap read. While the OL and RB run inside zone, the WR's to the top of your screen will stalk (outside) and run bubble (inside). Here, Kaaya sees 7 in the box with 2-high and no one near the flat defender.

As you can see in the GIF below, he has to read that flat defender and CB in case it's a trap coverage, once it's not, he can pull from the mesh and throw the bubble. This is a highly effective way to get 6-man boxes, and to keep the WR screen game relevant in 2016.