Dibia:Taking Basketball to the Next Level

We caught up with Brandon Okpalobi, founder and CEO of Dibia Athletic Development, and spoke with him about being a 'Cane, this year's Hurricane squad, growing up in New Orleans, and of course, what it takes for ballers of any level to improve their game and take it to the next level.

Share All sharing options for: Dibia:Taking Basketball to the Next Level

SOTU: Describe your experiences playing basketball in High School and at the University of Miami. What are your best memories as a ‘Cane?

Brandon: Playing for St. Augustine High School in New Orleans was a huge deal in the city where I’m from. We have a great tradition of basketball with good players like Avery Johnson, Kerry Kittles, Hollis Price and some recent high school college signees. We competed everyday again the best in the city and that prepared me for my college career at UM. The toughness of practice made practices at UM easy. We ran for everything in high school so I was in great shape.

I came to the University knowing that the only way I could play college basketball was to walk-on the team, which I didn’t fully understand. The day of tryouts I had my appendix removed and after my surgery, I was given a one-day tryout. After that the rest is history. I played each year at the UM and it was a great experience for me. Playing against current NBA players like Carmelo Anthony, Chris Paul, J.J. Redick just to name a few was an amazing experience.

SOTU: What are your impressions of ‘Canes basketball heading into the season? What is your opinion of UM’s back court?

Brandon: This season they are pre-season ranked 22nd in the Nation and I am very happy for them. With that ranking comes an expectation that I believe they can exceed. The coaching staff works hard and has a good game plan to maximize the skills of the players they have. We have a good group of athletes who like each other, play for each other and have a drive to win.

The backcourt is talented and extremely quick with Shane Larkin and Bishop Daniels. I’ve had the chance to play with both and they both have a high basketball IQ which is needed in the point guard position. I expect great things from them this year.

SOTU: What skills should young, enthusiastic basketball players focus on if they want to improve their game enough to play in high school, college or even in the pros?

Brandon: Mental toughness, basketball IQ, ball handling and staying low on offense and defense. So many kids watch the NBA but are not able to fully understand why certain things happen in a game. Also many young kids
are not mentally tough to compete every position. Ball handling is huge now, as the game has changed to where you have 7-foot athletes handling the ball now. Triple Threat, which is a fundamental basic of basketball, is almost scarce in the game of youth basketball. Young athletes watch the NBA and see them standing straight up and figure they can do the same which is not true. I tell all young athletes to watch more college basketball as they are doing everything as correct as possible so they can make it to the NBA.

SOTU: How would you describe a typical session of Dibia training?

Brandon: INTENSE! We train all of our athletes to understand the complete aspect of the game and to be a complete player. We offer individual, team training, clinics and camps. Dibia Athletic Development provides elite sports training for individuals who want to enhance their competitive level of play. Our staff focuses on the holistic enrichment of each player or group through a customized program created to maximize the development of our athletes. Through detailed analysis of individual skills, goals and needs, every drill on the court, each prescribed exercise, lift or movement, as well as all mental preparation, nutritional plans and off-court lifestyle programs, are designed to produce maximum, sustained results on the basketball court and give each player the best chance to reach their potential.

SOTU: When we last spoke, you mentioned that during your ‘Cane career the backups outplayed the starters in practice. How important is practice (no Allen Iverson references needed)?

Brandon: Practice is extremely vital in college. This is where you go over you scheme for the season or for each game. Watching film is huge for young athletes today to really understand how to improve your game. We would watch film before every practice on ourselves and other team to see how we can take advantage of their offensive/defensive sets.

In practice the Walk-ons (Schlie Guys ’00-’02) would beat the scholarship players daily. We basically played with extreme confidence because we could do no wrong. We were the scout team so we had free reign to just play the game. Also we had good players such as Jerry Schlie, Paulo Coelho, Danny Marakovits and Orlando Gonzalez.

Practice is were you made a name for yourself and earned playing time. Our practices is definitely were earned my playing time because most walk-ons don’t play. I tell all the athletes we train and coach that how you practice is how you will play.

SOTU: This is off basketball a bit, but how did the devastation of Hurricane Katrina affect you personally? Is being able to overcome adversity off the court a good predictor for dealing with adversity during a game? Aside from the physical aspects of the game, how do you coach-up theintangibles?

Brandon: Great question! I see it everyday with kids who have dealt with things in their life compared to other kids who have not had to deal with adversity. Hurricane Katrina was devastating to my family, friends and myself. I lost my best friends father and a few other people during the hurricane. At the time of the Hurricane I was in Miami but I had just left New Orleans the week before. Also I just graduated and was really undecided on where to live. The Hurricane made my choice and I am happy to say that things are getting back to normal in New Orleans but they still have a long way to go.

Adversity just like basketball builds character. "Its not what happens to you, its how you react to it." If you are able to handle adversity off the court then you should be able to handle the same on the court. Basketball you have more control of the game because if you prepare, play hard and work as a team; you will increase your chances of winning. Majority of this comes from what we coaches call heart. You have to have heart to play this game and be successful will playing.

Coaching up or the intangibles takes a skill that very few have. When coaching you have to have your players buy into your philosophy and take ownership in the program. From there you can dig deep to see what is lacking and how to bring the best out of each player to achieve the common goal you have set for your team. You can bring in guest speakers, watch film and put players in situations where they have to adjust. Being positive and uplifting to your players is extremely important when coaching up. 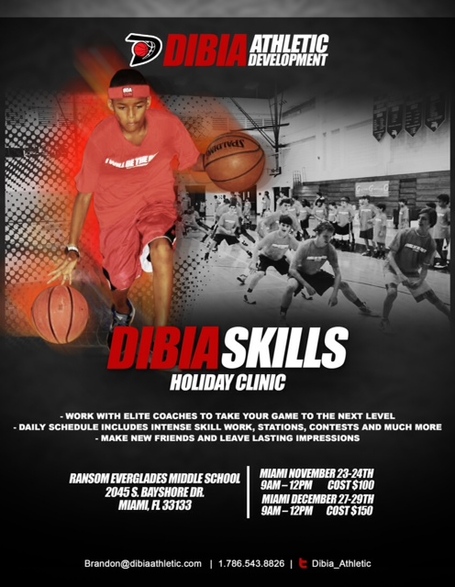 Here's a chopped-up video of an INTENSE Dibia training session!