Eschewing the traditional preview, we here at the 7th Floor are bringing you all the (mostly meaningless) things one needs to know prior to this week's match-up. The only rule? No game predictions. Today is that team up north Returning to Glory since 1993.

If you name the most self-serving, pretentious, pompous, 'HEY YOU! DOWN IN FRONT!' fans you can think of, well, that would be Michigan. But dammit, Notre Dame is a close second!

We all know the great, albeit short, history of these two fine programs, so we will leave the reminiscing to everyone else. Notre Dame will travel the insane distance of 90 miles to Chicago this weekend, while Miami plays essentially their 4th road game in 6 outings. Here is some perspective:

Miles traveled to/from games after this weekend: Miami will be 8,732, Notre Dame will be 7,752. And remember, Notre Dame opened in Ireland.

And we're not talking Corktown in Detroit people. The real Ireland, all the way across the pond. Miami's opponents (outside of Kansas State) may not have been top notch, but their road heavy schedule definitely has been.

Notre Dame comes in off a bye week and a top 10 ranking, using their vaunted defense to steam roll three Big 10 opponents into submission. They are only allowing 9 points per game, and have yet to trail on the scoreboard, which helps mitigate their anemic offense. Stephen Morris and OC Jedd Fisch will definitely have their hands full this week. Miami's best bet is they can stretch the field with their speed and take the underneath routes ND will presumably give them to corral big plays.

Having grown up in Michigan, I made the trek to north Indiana many years ago, only to find the famous stadium closed for summer renovations. GRRRR. It's your typical quaint, quiet, beautiful in the fall and horrendous in the winter Midwestern town.

Miami, featured in prime time, on NBC? Break out those Armani sport coats and slip on some loafers! Lets paint this town in pastels, Canes fans!

Blue and Gold. Contrary to popular belief, green is not one of Notre Dame's colors. The original colors were yellow and blue, yellow symbolizing the light and blue the truth. Ugh. How fittingly utopian of them. As you might have heard this summer, they are wearing an alternate for this 4th edition of the Shamrock Series, that being an annual off-site home game typically played in NFL stadiums. In pictures, the new uniforms look terrible, but I think in person/on tv the jerseys will look great. The helmet separated in thirds was always going to be a disaster.

Hurricanes fans are descending en mass into the Windy City this weekend, hopefully to help alleviate the unfair ridiculous obvious home field advantage Notre Dame will have playing so close to campus. Some advice to all those attending? Remember the Sun Bowl. 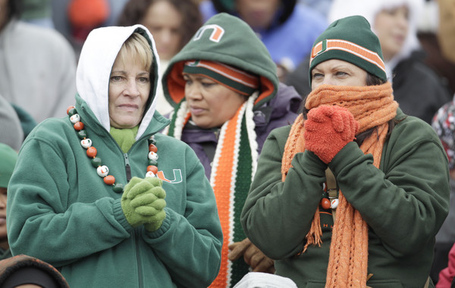 Saturday night's forecast: low of 36, with wind at 15 mph, so figure another 10 degrees lower due to the wind chill. Al Golden says no sideline heaters, because that ain't UTOUGH. Expect lots of hand warmers falling out of Miami players' gloves. Above all, remember that on any big 3rd down play, Miami's 20,000 fans at Sun Life are twice as loud as the 80,000+ at Notre Dame Stadium.

All Canes is setting up shop at The Roots on Friday night, for all your alumni reunion needs.

Friday night party hosted by @allcanesblog and #hurricaneclub at Roots in Chicago prior to UM vs. ND in Chicago. allcanes.com

A great Mexican restaurant downtown just north of the Loop. The crazy thing? The founder is Rick Bayless, brother of the one and only (ok, one of many) ESPN blowhard Skip Bayless. Just don't drop his name at the door, unless you like punches in the face.

The pizza choices are never ending in Chi-town, and a local would probably say this place is tourist drivel. Delicious, deep-dish, thick tomato sauced, orgasm in the mouth tourist drivel. The look might throw you off, as Chicago style deep dish puts the toppings under the sauce, creating almost a lasagna type pie. You can't go to Chicago without trying it.

Whiskey, and plenty of it. $5 specials every day of the week, excellent movies being shown on the big screen, and did I mention whiskey? They have over 500 selections to choose from. Hit it up on your walk back from Wrigley down Lincoln Ave.

Finally, we have a game you don't want to wait to buy tickets. The proximity for Irish fans, and the high profile attracting all the Miami fans, this ticket is in very high demand. Cheapest right now is $89, with the high rollers asking $1250 for 50 yard line seats on the ND sideline.

Manti Te'o is the clear cut stud here, but Tyler Eifert is a 6'6'' 250 lbs pass catching machine at the TE spot. Sophomore QB Everett Golson will start the game, but for any two minute drill Brian Kelly will sub in the more experienced Tommy Rees. According to One Foot Down, Prince Shembo abused future 1st round pick Taylor Lewan in the victory over Michigan. Stephon Tuitt already has six sacks in the first four games. Miami's OL has a long day ahead of them.

Notre Dame leads 16-7-1. The Sun Bowl debacle two years ago was the first meeting in over 20 years. The Irish won 11 straight until Schnellenberger's 1981 squad broke the streak.

¿You Tube Clip of Glory?

Obviously lots of clips to choose from here, plenty of tradition and history. I'll go with the first hyped Game of the Century, also the first time College Gameday went to a campus for their show. Florida State losing their undefeated season + Notre Dame fans remembering they lost to a crappy BC team the next week to kill their title hopes = the perfect double trolling clip.