Breaking Down Kaaya/Dorsett Chemistry in Videos and Images

The 'Canes freshman QB and senior WR have found a nice synergy.

Share All sharing options for: Breaking Down Kaaya/Dorsett Chemistry in Videos and Images

Dorsett's 201 yards on the day were the third most in a single game in UM history.

Kaaya's 342 yards were a single game 'Canes record for a true freshman.

The 4.2 speed of PD is complimented nicely by Kaaya's strong arm and feathery touch.

"Phillip [Dorsett] is an awesome player. I think he’s one of the fastest players in college football. With his speed, I don’t see how anyone could cover him on a post-run or a go route. I could throw it as hard as I possibly can and I probably couldn’t overthrow him." - Brad Kaaya

Let's take a closer look at what made these two so successful together in yesterday's big win.

In the third quarter with the 'Canes up 27-14, Dorsett had already had a huge game, but had been quiet for about a quarter and a half. The Red Wolves had slowed the UM offense down some by blitzing early and often to the talented but very green right side of Miami's offensive line.   On this play they decided to send a corner blitz. Lining up Dorsett to the side that Arkansas State was blitzing frequently off of, was a nice subtle move by OC James Coley. 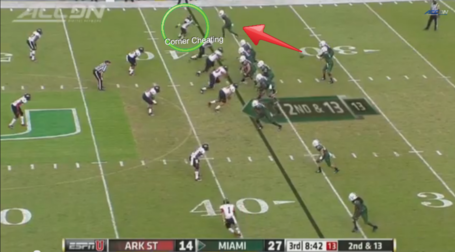 Here he comes, and Kaaya recognizes it immediately. 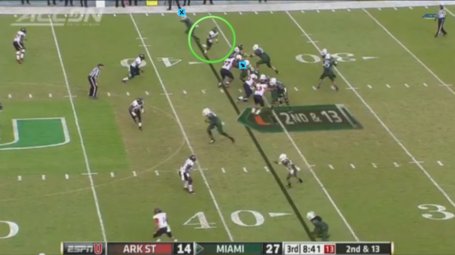 Ditto Dorsett, who wisely breaks his route off quickly. 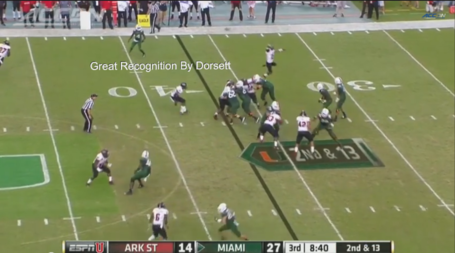 Kaaya delivers a strike. Now you have one of the fastest players in all of college football one-on-one in space. 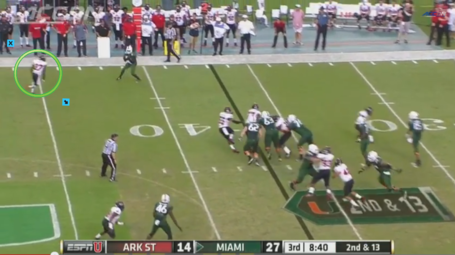 You can argue that the ASU player is just a poor tackler, or just gave a sub par effort. But from the angle of his shoulder lean, it looks like he expected Dorsett to be a full yard behind where he actually is. To some extent this is a byproduct of PD's world class speed. 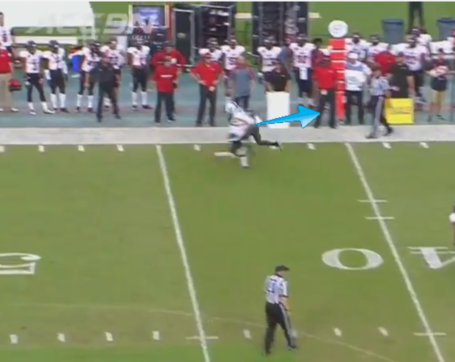 Once that initial tackle is broken, its academic.  There is a State player at the bottom of the screen with a shot at Dorsett, but he outruns the angle easily. 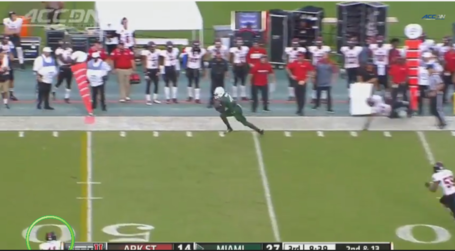 Let's take a look at the play in its' entirety.  Great reads by both players, leads to a relatively easy TD that ices the game.

In the first quarter the prolific duo got things started with a beautiful connection on a go route.

Let's break that one down.

Pre snap Dorsett is in the slot with Braxton Berrios beside him in a twins formation.  The defense shows the first of many blitz looks to the right side of Miami's offensive line. 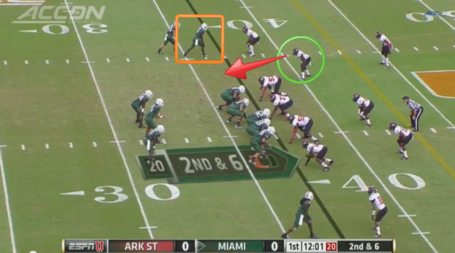 The blitz comes, and with UM sending both RBs out in the pattern it's a 5 on 5 blocking scheme. Kaaya has a man right in his face but because he read blitz from the get go, he knows he has one-on-one coverage down the field, and gets rid of the ball quickly.  He does a very good job stepping into the throw despite the pressure. 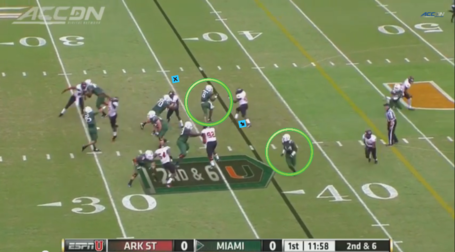 Dorsett beats his man with relative ease. The throw is spot on and he barely breaks stride. 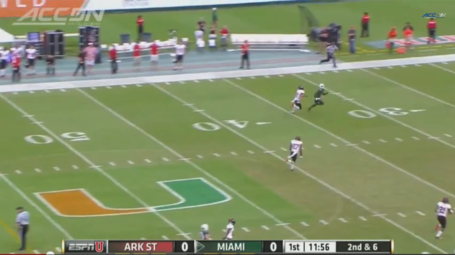 And you're not going to catch him from behind. 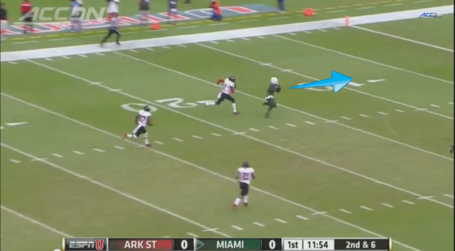 Here it is, start to finish:

So besides the aesthetically pleasing nature of watching Kaaya to Dorsett, what can we take away from their big days?

Because of each player's abilities to make quick reads and adjust on the fly, Miami's play book expands and opens up to taking shots down the field, something that was missing in the loss to Louisville.  It's no secret that defensive coordinators are going to come at two new starters on the offensive line in an attempt to get heat on a freshman QB.

And while UM has a plethora of good targets for Kaaya to go to, none are more experienced or faster than Dorsett.

If these two continue to work this well together, it is going to be a nightmare for opposing staffs to scheme against Miami's offense.