After an impressive freshman season, Denzel Perryman had a couple setbacks during his sophomore campaign, but he is more motivated than ever to get back to his dominating form. 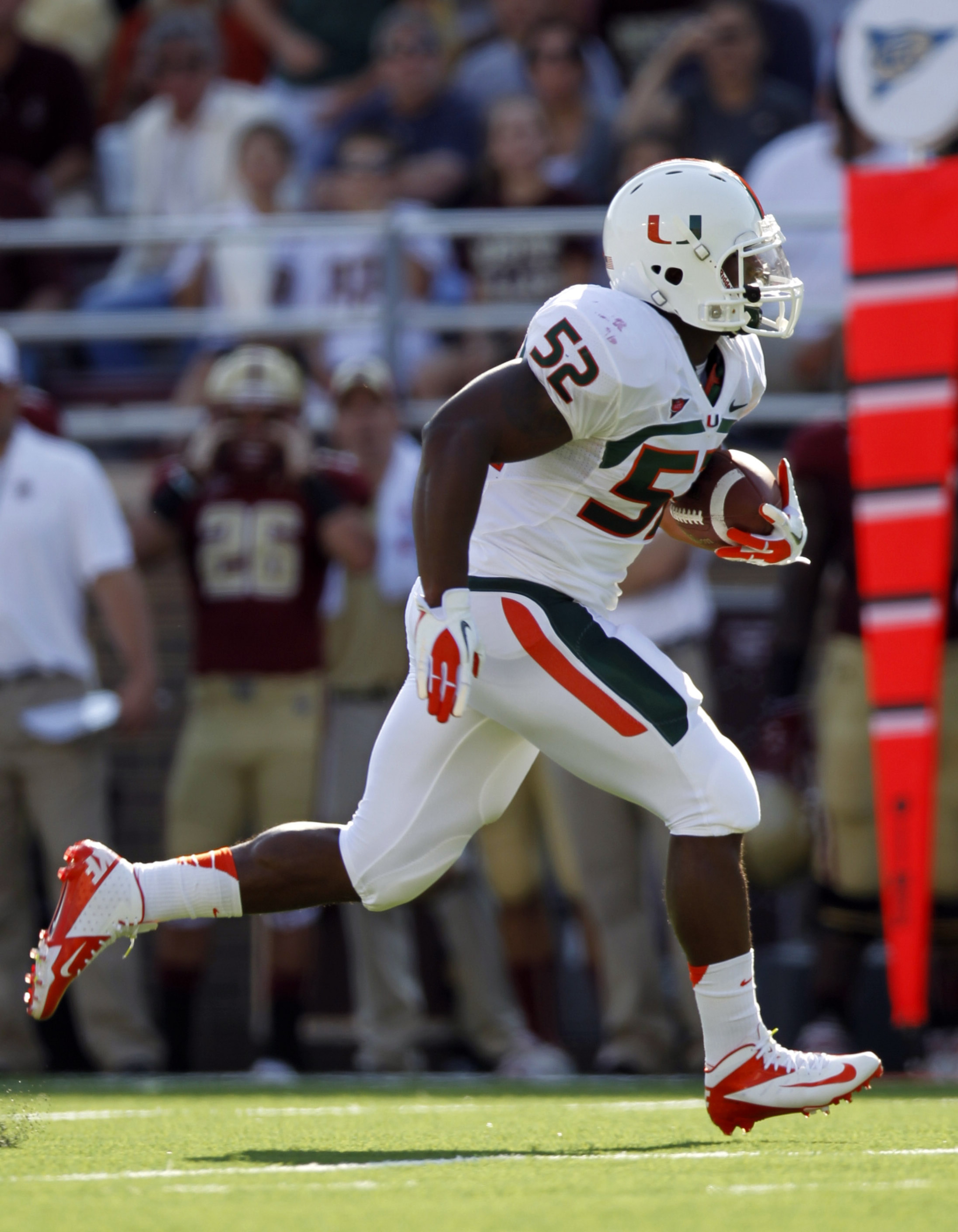 He does it all. (Photo: Greg M. Cooper - US Presswire)

There's no secret that the University of Miami produces great NFL players. UM produces so many players that the fans often argue about what position "U", Miami is. You could make the argument for almost every position on the gridiron, and linebackers have a legitimate case. We've gotten to enjoy names like, Ray Lewis, Jon Beason, Jonathan Vilma.. Denzel Perryman?

Denzel Perryman was a three-star prospect coming out of high school by ESPN, and was slotted as the 28th best linebacker in the country. While many hoped he was going to be a 'Cane from the start, he was being recruited heavily by then new Florida head coach, Will Muschamp. Despite Muschamp's efforts, Perryman decided to stay home and become a Miami Hurricane, and thank god for that.

If you got a chance to see Perryman play in high school, you could actually tell people stories about when Perryman was "small". Perryman was a solid 205 pounds during his senior year and he laid some incredible hits (my old high school included). Three years later, he is now at 236 pounds, and don't let anybody tell you otherwise, he really is ALL muscle. He was the heart and soul of those Cavaliers teams. He was their kick-returner at times, he punted, oh and yeah, he also recorded 137 tackles as a senior. If you wanna see how awesome Denzel was in high school, check this video out.

After a freshman season where we watched Perryman collect more tackles than any freshman in the ACC and second most amongst all ACC players, his sophomore season was a little sour to us all.

Perryman was forced to sit out the North Carolina State and Georgia Tech games because of a high ankle sprain last season. If you didn't watch those games, the Hurricanes defense allowed 73 points combined those two games that Perryman sat out due to injury. Sure, the 'Canes allowed 41 points the week that Perryman came back against Notre Dame, but let's face it, nobody showed up to that game.

No mercy, even in practice. (Photo: Brad Barr - US Presswire)

After playing outside-linebacker most of his freshman season, Coach Golden decided to give the keys to the Middle Linebacker spot to Perryman, at least to start the season. Despite his injuries and playing a new position, Perryman still put up some really solid numbers that will be a good season for a lot of players. #52 was a third-team selection by Phil Steele, earned honorable mention by ACSMA and league coaches. We all remember the hits against USF's Bobby Eiffel or FSU's Nick O'Leary, but my favorite moment of Perryman's season was this interception taken to the house against Boston College.

Perryman finished the season as the second leading tackler for Miami with 64 tackles with 45 of those coming without the help of a teammate, and he also recorded 6 tackles for loss in 2012.

Like a lot of players on the roster, Perryman was forced to come in and play as a young linebacker without benefiting from a redshirt and just working out and learning schemes. Perryman, however, stepped right up and quickly became a favorite of many Canes fans. After a disappointing season, not just for us, but for Denzel himself, we can expect some really good things out of 52 this season.

The first two seasons of Denzel Perryman, we've seen glimpses of how talented he is and truly how good he could be when healthy I think the injuries to him in 2012 were a blessing in disguise and made Perryman work even harder than what he already does, to come back a better player.

Now at 236 pounds, Perryman will be lurking out on the outside (where he is used to playing) and will be looking to lay out a couple more big hits for Canes fans to enjoy and brag about. After his two-interception spring game, there's a lot of expectations for Denzel this season, including Al Golden: "He's got to be a playmaker for us .. Consistency is what we're measuring now with Denzel" 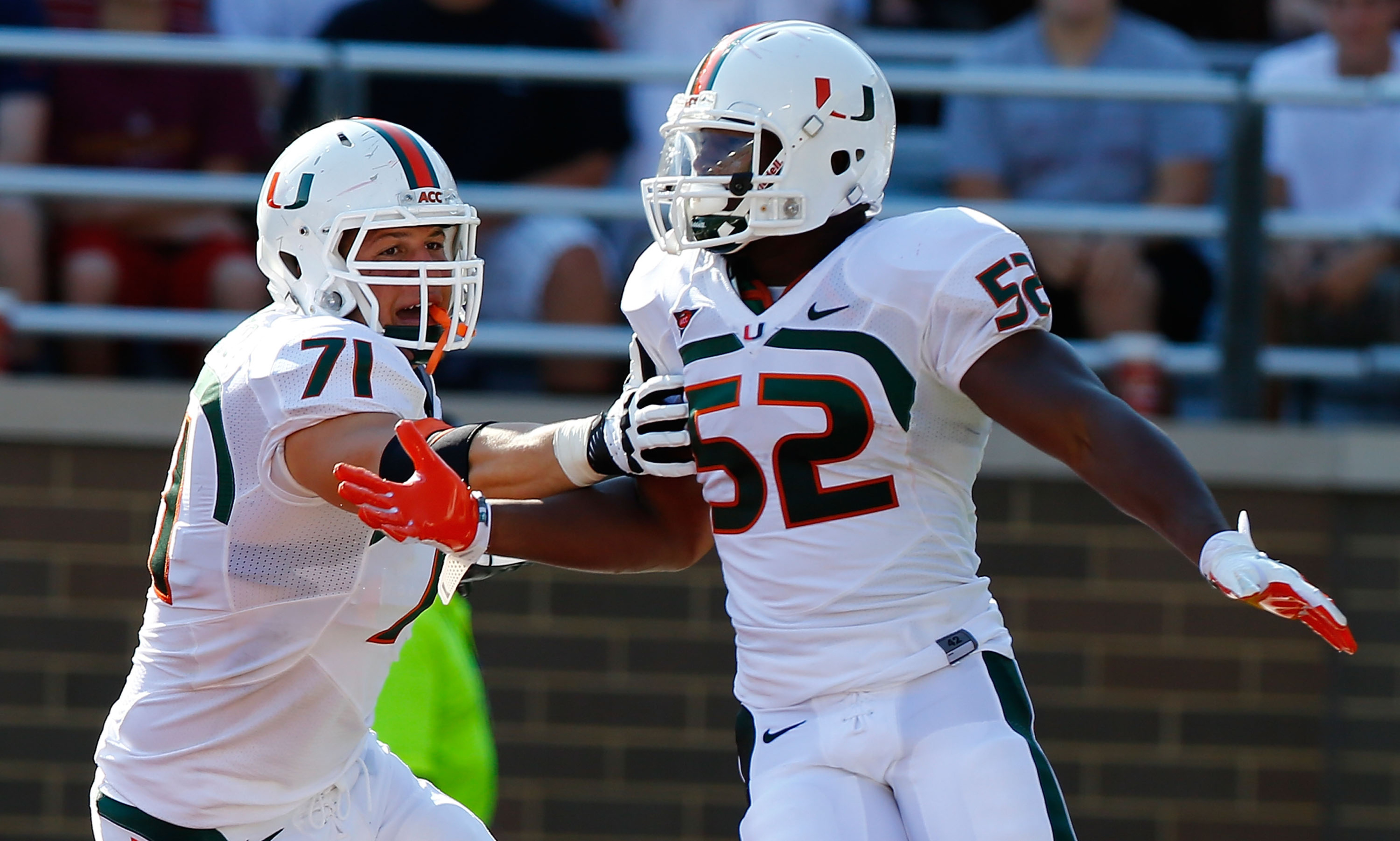 The President is going to have a huge year. (Photo: Jared Wickerham - Getty Images)

I don't want to predict any specific number of tackles for Denzel, but I am extremely confident that we're going to see a consistent and dominant Denzel Perryman this fall and he's going to work his way into adding his name to the all-time great linebacker conversation at the University of Miami, especially with words of encouragement from Jonathan Vilma.